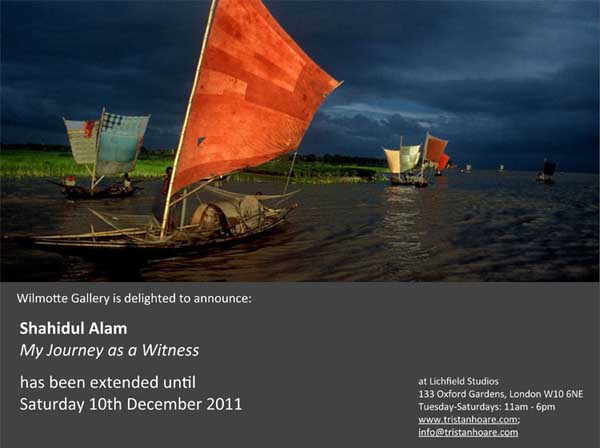 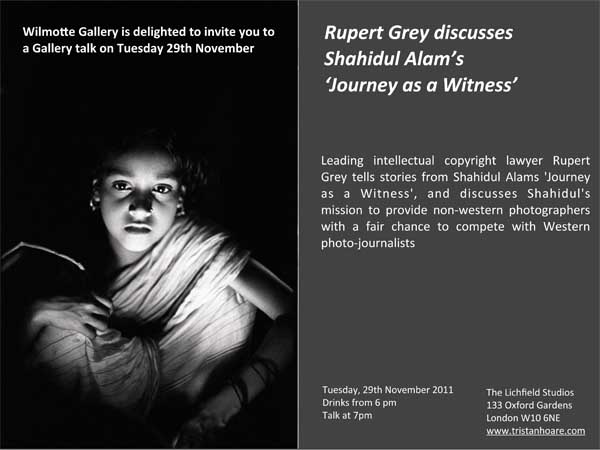 Name a foreign country and then count how long it takes for the cliches to come rushing forth. Start with, say, Switzerland ? what first leaps to the mind are banks, chocolate and watches. Or, in the case of Brazil, it’s soccer and Carnaval. Now consider Bangladesh. If any mental picture comes up at all it probably has to do with floods and famine.
Interview on NPR
It is easy to see why those prevailing images and visual stereotypes of his homeland frustrate the heck out of Shahidul Alam. “The image of my country was built largely upon what white, Western photographers were telling,” he tells?Morning Edition host Steve Inskeep in an interview Monday.
Alam recently published a book, “My Journey As A Witness.” This collection of photographs documents a career spent not just taking beautiful pictures but producing a new set of images that enable a more nuanced way of seeing Bangladesh.
Many of his portraits are of individuals living in extreme poverty and yet the portraits manifest optimism. He speaks proudly of how the poorest of the poor in his country “manage in very difficult situations coming out with some sort of a formula for survival, which really is to be admired.”

Listen to the audio

Morning Edition [7 min 19 sec]
November 14, 2011
Steve Inskeep talks to Shahidul Alam, a former chemist who became a photographer because he was tired of seeing images of the developing world through the lens of Western photographers. He now runs an art gallery, a photo agency and a school of photojournalism in Bangladesh. He recently published a book of stunning photographs called My Journey as a Witness.
——————————————
Transcript:
STEVE INSKEEP, host: Twenty years ago, a cyclone devastated Bangladesh, and the photographer Shahidul Alam says he received a request for news photos from The New York Times. Mr. Alam says he argued successfully for different kinds of images to make the paper.
SHAHIDUL ALAM: They wanted bodies. They wanted destruction. They wanted to show the horror of the cyclone which was important, of course. But what is also important was the fact that people were rallying around to support each other; that farmers were replanting their seeds; that fishermen were going out into the sea; that human beings were trying to rebuild their lives.
INSKEEP: Alam says he wants to give the world a fuller image of poor countries like his. His new book of photos, called “My Journey as a Witness,” does not flinch from Bangladesh’s many problems. But his photos also seek to show the rich colors, the expressive faces, the very human lives of crowded places like the mega-city of Dhaka.
END_OF_DOCUMENT_TOKEN_TO_BE_REPLACED 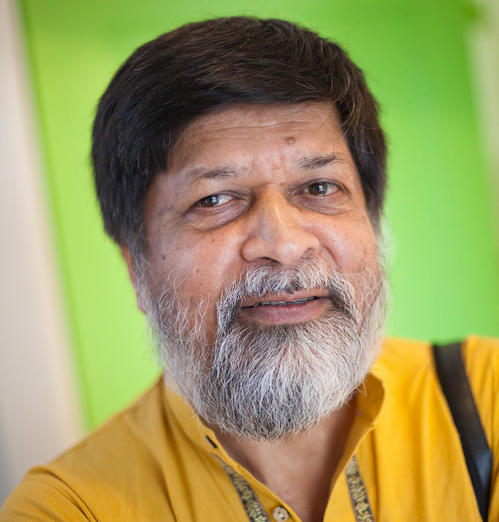 Shahidul Alam walked on stage on Thursday wearing a marigold-colored salwar kameez, a camera over his left shoulder, and a beltpack slung around his hips. There was no mistaking his calling. The Bangladeshi photographer, activist and social entrepreneur has almost single-handedly rebalanced the world of photojournalism, long dominated by Western photographers and their worldview. He has shifted its lens eastward and southward by training legions of photographers in his homeland, creating an award-winning photo agency to sell their work and founding a prestigious international photography festival to showcase their talent. And this fall, he published a book,?My Journey as a Witness, telling the story of Bangladeshi photography as an instrument of social justice. He serves as an ambassador of this movement, in the words of PopTech?s executive director, Andrew Zolli, ?travelling the world leaving new cultures of art makers in his wake.? We sat down with Alam backstage in Camden, Maine.
PopTech: You founded?Drik, a photo agency, and the?Chobi MelaInternational Festival of Photography. Why did you feel it was important for Bangladeshi photographers, as well as their peers, to have these outlets for their work?
Shahidul Alam: Firstly, it was a question of addressing this very distorted perception people have of what I call the ?majority world? countries. Our poverty is a reality, but that is not the only identity that we have. Secondly, I wanted to challenge a very unidirectional form of storytelling that has — to a large extent — been propagated by the West. The richness and diversity of human life gets lost in a very agenda-led information distribution system. So that was the beginning.
We also wanted to celebrate our own culture. It?s not that I am against white, Western photographers producing work in Bangladesh — I think our ideas need to be challenged just as much. It?s the monopoly of dissemination that I was against. So we wanted to create a space for diversity — for both Western work and our own work. That?s where the Chobi Mela festival came in — to facilitate that cultural infusion.
END_OF_DOCUMENT_TOKEN_TO_BE_REPLACED