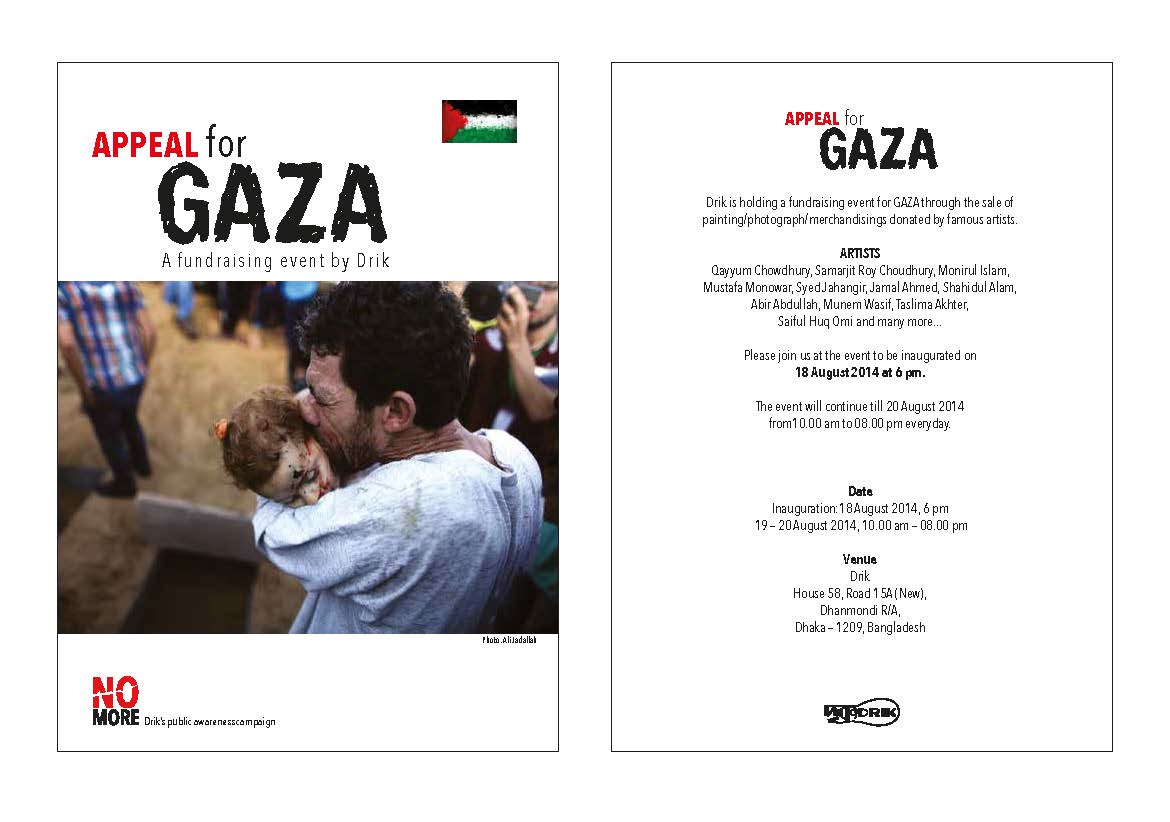 Soaked in blood, children,
their heads blown out
even before they are formed.

all the blood in Gaza.
A river of blood flowing,
flooding the desert sands

with incarnadine hate.
An endless lava?stream,
a wellspring red river

on an otherwise
parched-orphaned land,
bombed every five minutes
to strip Gaza?of whatever
is left of the Gaza strip.
With sullied hands

of?innocent children,
we strip ourselves
of all dignity and grace.

Look at the bodies
of the little ones killed ?
their scarred faces?smile,

their vacant eyes stare
with no malice
at the futility?of all

the blood that is spilt.
And even as we refuse
to learn from the wasted

Sudeep Sen?is widely recognised as a major new generation voice in world literature and ?one of the finest younger English-language poets in the international literary scene? (BBC Radio).?


I
ALTHOUGH Bengali culture would have us believe otherwise, motherhood is not something — regarded by some as an instinct, by others, as a virtue — that is timeless and unchanging. It is social and historical. END_OF_DOCUMENT_TOKEN_TO_BE_REPLACED

He stopped at every print. Getting close to scrutinise every character, pausing more at some that perhaps stirred a memory. He smiled broadly when I approached him. ?eto amar chobi tulsen? (it is me you?ve photographed) he said. This was his war. He remembered the pain the terror, the joy. He had never applied for registration. No card, no land, no perks. He had never been asked to speak at a dais extolling his glory. Victory being won, he had drifted out the way he had drifted in.

He was a Baul singer, living off the alms given by visitors to Suhrwardy Uddayan, where the deed of surrender had been signed on the 16th December 1971. He had no regrets for his lack of wealth, or for not having had his share of the spoils of war. It was our departure from the values that had driven him and his fellow muktijodhdhas (freedom fighters) that saddened him. He had a great love for Mujib, and felt we had let him down.

END_OF_DOCUMENT_TOKEN_TO_BE_REPLACED The?front page?photo on?Thursday?s Washington Post?tells, in a single frame, a very personal story from Wednesday?s Israeli airstrikes on the Gaza Strip.?Jihad Misharawi, a BBC Arabic journalist who lives in Gaza, carries the body of his 11-month old son, Omar, through al-Shifa hospital in Gaza City.

An Israeli round hit?Misharawi?s four-room home in Gaza Wednesday, killing his son, according to BBC Middle East bureau chief Paul Danahar, who arrived in Gaza earlier Thursday. Misharawi?s?sister-in-law was also killed, and his brother wounded.?Misharawi told Danahar that, when the round landed, there was no fighting in his residential neighborhood.
?We?re all one team in Gaza,? Danahar told me, saying that Misharawi is a BBC video and photo editor. After spending a ?few hours? with his grieving colleague, he?wrote?on Twitter,??Questioned asked here is: if Israel can kill a man riding on a moving motorbike (as they did last month) how did Jihad?s son get killed.?
Danahar also shared the following photos of?Misharawi?s small Gaza home, which appears to have been heavily damaged. The place where the round punctured his ceiling is clearly visible. BBC World editor Jon Williams?sent a memo?about the young child?s death to colleagues, according to The Telegraph:

Our thoughts are with Jihad and the rest of the team in Gaza.
This is a particularly difficult moment for the whole bureau in Gaza.
We?re fortunate to have such a committed and courageous team there. It?s a sobering reminder of the challenges facing many of our colleagues.

Reuters also had a photographer at the Gaza City hospital where Misharawi took his son. The story that these photos tell, of loss and confusion, may help inform the Palestinian reactions ? and, as the photos continue to spread widely on social media, perhaps the reactions from beyond the Palestinian territories ? to the violence between Israel and Gaza. 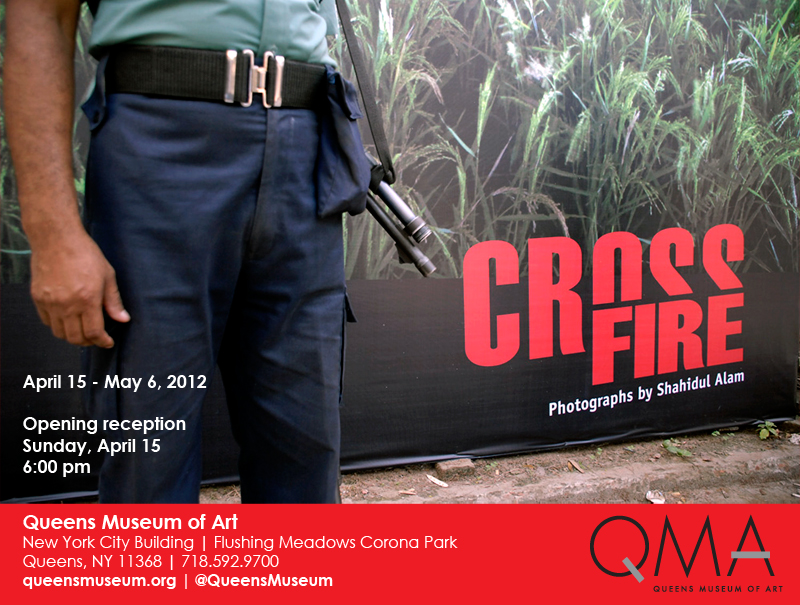 Forum & Opening Reception for Partnership Gallery Exhibition in Collaboration with Drik Picture Library, Dhaka.
Bangladeshi photographer and human rights activist Shahidul Alam?s Crossfire exhibition will open in the Partnership Gallery at the Queens Museum of Art on 15th April, 2012 and run until May 6th, 2012. The exhibition aims to gather international support for a campaign to end extra-judicial killings in Bangladesh by state forces, usually called ?crossfire.? END_OF_DOCUMENT_TOKEN_TO_BE_REPLACED

The whole thing is regrettable, really. Shocking, truth to tell. And so sad, I?m sure, for those people, those blanket-wearing, beard-growing, false-god-worshiping, probably-related-to-terrorists, citizens of Afghanistan whose wives and children and babies were gunned down in their beds, shot, murdered, slaughtered, and then burned by one of America?s finest Sunday morning. But hey, what are ya gonna do? These things happen.
It seems the soldier in question was?not, in fact, representative of our brave fighting men and women. He was just another in the continuing series of?lone gunmen?who have been shooting up the world here and overseas for as long as any of us have been reading the newspapers. David Cortright, the director of policy studies at Notre Dame’s Kroc Institute for International Peace Studies, tells us “This may have been the act of a lone, deranged soldier.? I saw a headline that said he was a?rogue. OK; rogues do as often as not, ?go rogue? as no less an authority than Sarah Palin would have us know. So given time to reflect a bit, I guess I?m sorry I impugned our noble troops. END_OF_DOCUMENT_TOKEN_TO_BE_REPLACED

SEATTLE ? Well, the latest news is that a lone U.S. serviceman has gone on a shooting rampage outside Kandahar and killed at least 16 people. The Los Angeles Times reports:

The shooting early Sunday took place in Panjwayi district outside Kandahar city, in a village called Alkozai. U.S. military officials, speaking on condition of anonymity, said it was believed that the assailant had suffered a mental breakdown.