Israel and Hamas have significantly moderated their attitudes towards one another despite official denials. Indirect talks in Cairo designed to achieve a lasting ceasefire between the two war weary parties effectively constitute negotiations about the parameters of a potential future peace agreement. END_OF_DOCUMENT_TOKEN_TO_BE_REPLACED

If Israel came close to destroying Hamas in two earlier confrontations in 2008/9 and 2012, it has succeeded in the latest round of fighting to rescue the group from potential demise. Hamas is emerging as the key player capable of cornering Israel politically and diplomatically despite its military superiority.

THE EFFORT to achieve a ceasefire in the Israeli-Hamas war in the Gaza Strip resembles a see-saw with at times Israel and at other times Hamas rejecting a halt to hostilities or violating a brief silencing of the guns in a bid to ensure its collapse. The back and forth reflects in the first instance a battle between Israel and Hamas to occupy the moral high ground.

But more importantly it highlights a growing realisation that Hamas is emerging politically strengthened from the death and destruction in Gaza while Israel is fighting a rear guard battle to turn military success into political victory. END_OF_DOCUMENT_TOKEN_TO_BE_REPLACED

END_OF_DOCUMENT_TOKEN_TO_BE_REPLACED

You take my water
Burn my olive tree
Destroy my house
Take my job
Steal my land
Imprison my father
Kill my mother
Bomb my country
Starve us all
Humiliate us all
BUT
I am to blame: I shot a rocket back 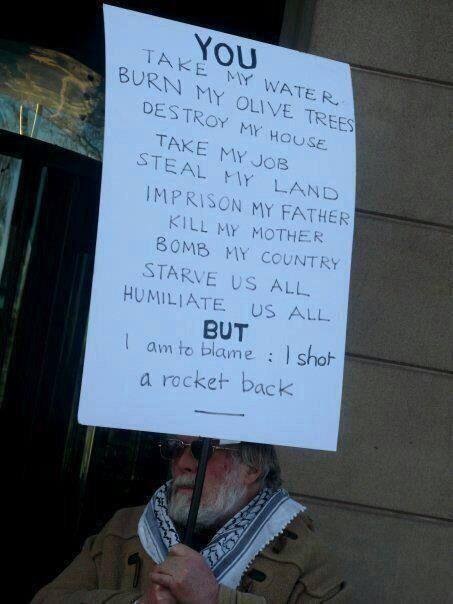