Mubarak is gone! Egypt is free!
Equally true is the fact that power has been assumed by the Supreme Council of the Armed Forces. That the 30 year-old state of emergency has not yet been lifted, neither has any time frame been set, nothing beyond the invocation, “as soon as the current circumstances are over.” ?Equally true is the fact that Egypt’s new, transitional (military) rulers have been quick to affirm Egypt’s commitment to all regional and international obligations and treaties, an implicit signal that the treaty of all treaties, Egypt’s peace treaty with Israel?propagated as a bulwark for peace and stability in the region, but in reality, one which helps sustain Israel’s military occupation of the West Bank and the seige of Gaza?is not under threat. An affirmation swiftly welcomed by the Israeli prime minister Benjamin Netanyahu, who described the treaty as “having greatly contributed to both countries,” as “the cornerstone for peace and stability in the entire Middle East”; close at his heels was US president Barack Obama who welcomed the Egyptian pledge to “stand by” its international obligations.
But, it is also true that while Egyptian demonstrators, both young and old, rallied to scrub off slogans and graffiti from walls, to clean up the streets of Cairo of rocks, debris of violence, charred remains of Mubarak’s effigy (“Clearing the streets is just a start. It is our country now”), protestors still camped out in Tahrir square, refusing to leave until the military issued official statements on their next steps. It is also true that pro-democracy activists insist that their revolt was not against one man but against the whole regime, which Mubarak and his predecessors, had instituted. It is also true that their invincible strength prevented Omar Suleiman?the CIA’s man in Cairo who devised and implemented the programme for renditioning and torturing terrorist suspects,?in whom Mubarak transferred authorities while still clinging to power?from taking charge. Pro-democracy activists insist that the revolution will not be over until all responsible for the hundreds of deaths will be investigated, tried and punished. It will not be over until Egypt’s stolen funds are restored.
Swiss banks have frozen assets of the ousted president, who is currently hunkered down in his residence at the Red Sea tourist resort, Sharm al-Sheikh. Former interior minister Habib El Adly, former prime minister Ahmed Nazif have been banned from travelling, their assets have been frozen. Former information minister Anna El Feqy has been placed under house arrest while rumors fly of business tycoons fleeing. But it is also true that while figures are totted up of how much the former president, his Welsh wife and their son fleeced Egypt, that while the huge personal wealth amassed by other members of the corrupt coterie are calculated, one does not hear of corruption within the army. That these stories are silenced.
But it is undeniable that the mass uprising was organic. One that persisted after Mubarak’s ouster, attested to by scenes of youths in Alexandria, the mainstay of the uprising, stopping cars and telling their occupants, abide by traffic rules. Of telling pedestrians, do not give bribes, read up the constitution.
It is also true that the mass uprising did not occur overnight but was, as Marwan Bishara reminds us, “the culmination of countless sit-ins, strikes, pickets, and demonstrations.”
That behind the 18 day popular revolt lies long years of grassroots mobilisation, the tireless efforts of scores of coalition builders who worked with labour unions and opposition parties, both old and new, including the Muslim Brotherhood. That we must not forget people such as, says Bishara, the late Mohammad El-Sayed Said who helped to found the Cairo Institute of Human Rights Studies and, the Egyptian Organisation for Human Rights. Who underwent arrest and torture for writing the “much-acclaimed report about the punishment of dissidents by torture” (Al-Ahram). Who died last year after a long period of ill-treatment at the hands of the Mubarak regime, and a 2-year struggle with cancer. Who was “much missed in Tahrir Square.” There were many others. 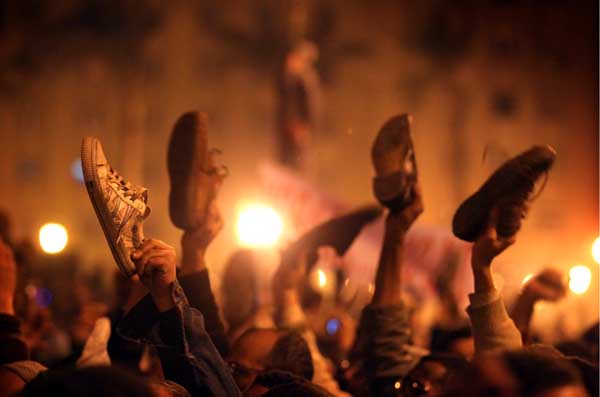 CAIRO, EGYPT - FEBRUARY 01: Anti-government protestors wave their shoes, in a gesture of anger, after President Hosni Mubarak announces that he will not seek re-election on February 1, 2011 in Cairo, Egypt. Protests in Egypt continued with the largest gathering yet, with many tens of thousands assembling in central Cairo, demanding the ouster of Egyptian President Hosni Mubarek. The Egyptian army has said it will not fire on protestors as they gather in large numbers in central Cairo. (Photo by Peter Macdiarmid/Getty Images)

It is also true that Mubarak was suffering from severe delusions when he confided in a 20 minute telephone conversation to former Israeli defense minister Binyamin Ben-Eliezer, a close friend and ally, that he was looking for “an honorable way out” (Press TV, February 12, 2011). ?This was on Thursday, February 10, the day he refused to step down as anticipated, offering his “children” constitutional changes instead, and transfer of authorities to Suleiman. It was the speech greeted with raised shoes, the ultimate sign of dishonor for leaders and politicians in our parts of the world. One that was globally iconised by Muntazer al-Zaidi, the Iraqi journalist who threw his shoe at George Bush in 2008. A farewell parting.
END_OF_DOCUMENT_TOKEN_TO_BE_REPLACED