Skip to content
‘Bandicoot with quince’, 2005, by Marian Drew

Make the most of this unique opportunity
Deadline- 10th Jan, 4pm (BDT) 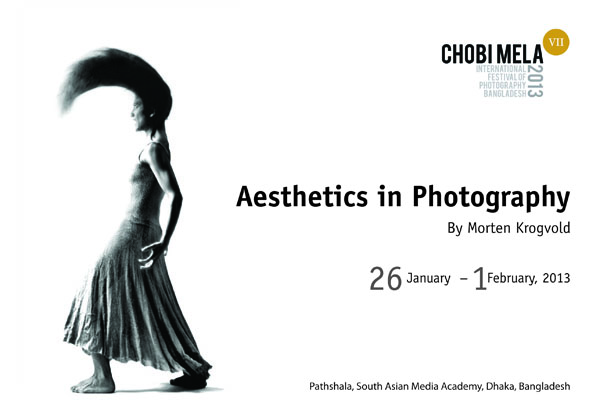 Curating 101
By Jody Haines
This 4-day workshop on curating is designed for the photographers in Asian countries who are interested in curating and want to be engaged in the process of curation.
The workshop will help the participants to understand the basic steps of curating, from generating ideas to implementation. Process includes how to design an exhibition, how to install it and how to create a space for the audience to interact with body of work.
Workshop facilitator Jody Haines/ curator of Brisbane powerhouse start working with each participant in February 2nd, right after the 1st?week of Chobimela, international festival of photography in Dhaka.
Jody will share her work process. Along with lectures the participants will be given assignments to curate a body of work as a sketch.
Workshop Details

Application Deadline:?Jan 10th, 5 pm (Dhaka time), 2013
For more information please contact?Shahriar@pathshala.net
Bio ??Jody Haines
Jody Haines is a Curator of Photography from Australia with over 10 years of curatorial practice.??She has been the curator at Brisbane Powerhouse, one of Australia?s leading Multi Arts institutions, for the past 6 years. During this time she has developed a solid program of documentary based photography delivering over 90 photographic exhibitions ranging from International to local artists.??Jody?s main passion is for storytelling and providing a platform for the community to gain a glimpse and an understanding of the world we share.
Please Retweet #photography #chobimela #pathshala #Bangladesh

“I’d better put on my sincere smile” he said as he straightened up realising I was about to take his picture. Arthur C Clarke, the king of Sci Fi, was only half joking. The sincere smile is certainly not the monopoly of the pre-election campaigner. I find myself doing it when I spy a camera. Or put on a more sombre expression depending upon what seems more appropriate. I straighten my hair. Others turn away, some beam, some get embarrassed. The camera is rarely something one is inert to. Our image something we jealously guard.

The photograph trespasses in other ways. The fine art critic, unsure of how to value the medium, is uncomfortable in photographyland. Flirting with reality, rejecting the norms of classical art practice, the deliberately banal, the quietly provocative, the inanely repetitive and even the stunningly picturesque photograph, unsettles viewers on gallery walls. Is it good? Should I like it? Should I pay? END_OF_DOCUMENT_TOKEN_TO_BE_REPLACED

An exhibition of photographs by Shahidul Alam

There is a wall running along a street. The writing on it is fragmented and cannot quite be made sense of. The image was taken in the middle of the night and a yellow glare was allowed to invade the site, as the wall slipped away at an angle. A shadowy presence barely registered on the shot. This urban setting, one is tempted to say, could be nothing but the scene of a crime. The sinister, uneasy beauty of this work by Shahidul Alam informs other images that are part of his new series, again and again. Others are eerie, otherworldly; and others still, seem familiar yet are anguished, as if the common ground for existence was being subtracted from the picture altogether.
Photography is usually taken at face value and recognized as the construction of a factual world, and celebrated as such, for facts possess a no-nonsense value – or so we would like to believe – that will hopefully help us to get things crystal-clear in the mind. The printed image is envisaged and expected, by the many who support this view, to be self-evident, and self-explanatory, too.
To transform photography into the art of tracing an absence is not a method that is self-evident, and yet a case can be made for it: the print, which is an image on its physical support, is one more object added to the world and is often made to stand for what once was, never to be fixed or grasped in the same manner again. But in the images of this series, what is it we are missing that fills us with anxiety of some kind or another? When acutely perceived, an absence stops us in our speech, it wracks and unnerves us; it unsettles the mind. Absence, as a matter of fact, can be identified, can be lingered on and felt, but cannot be quantified and any attempts at giving a qualified description of the feelings involved are bound to fail.
Whatever one is led to believe should be expected of contemporary photographic work in the documentary mode, this series challenges starkly. Artificial lighting has been used throughout and its effect is not just strange but painful. The series offers no narrative to behold but the images hold together, perhaps because their author finds different ways to remind us that we will not find a place to rest our heads in them. These are nocturnal viewings in a sleepless night.
Jorge Villacorta
Curator
More at:
New York Times Review
Photo District News
Rights Exposure Review
Front Page Manob Jomin (Bangla)
Ex Ponto Magazine Netherlands
Lawyers protest