Global Research, September 09, 2012
On September 11, 2001, a neighbor telephoned and said, ?turn on the TV.? I assumed that a hurricane, possibly a bad one from the sound of the neighbor?s voice, was headed our way, and turned on the TV to determine whether we needed to shutter the house and leave.
What I saw was black smoke from upper floors of one of the World Trade Center towers. It didn?t seem to be much of a fire, and the reports were that the fire was under control. While I was trying to figure out why every TV network had its main news anchor covering an office fire, TV cameras showed an airplane hitting the other tower. It was then that I learned that both towers had been hit by airliners.
Cameras showed people standing at the hole in the side of the tower looking out. This didn?t surprise me. The airliner was minute compared to the massive building. But what was going on? Two accidents, one on top of the other?
The towers?the three-fourths or four-fifths of the buildings beneath the plane strikes?were standing, apparently largely undamaged. There were no signs of fire except in the vicinity of where the airliners had hit. Suddenly, one of the towers blew up, disintegrated, and disappeared in fine dust. Before one could make any sense of this, the same thing happened to the second tower, and it too disappeared into fine dust.
END_OF_DOCUMENT_TOKEN_TO_BE_REPLACED 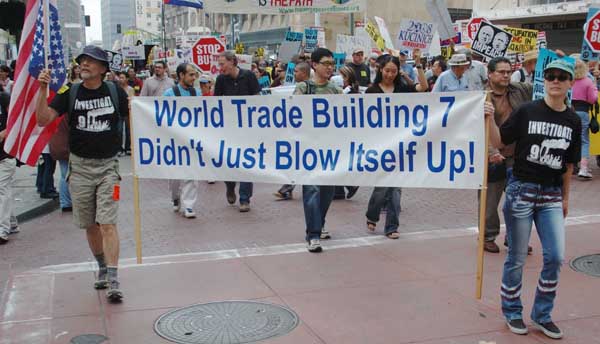 Before launching into my discussion of the `blowback? paradigm, let?s take a quick look at the findings from a new poll of New Yorkers: ?36% want a new investigation of the collapse of Building 7.
Apparently, 1 in 3 New Yorkers are unaware of Building 7?s collapse; ?but, of those who are, ?24% believe it was a `controlled demolition.?
Not `fire?, as the National Institute of Science and Technology?s 2008 report claims: ?[Building 7 is] The first known instance of fire [in history] causing the total collapse of a tall building.? NIST termed it `a new phenomenon.?
Conducted by the independent Siena Research Institute, the poll was commissioned by Remember Building 7, an advocacy campaign calling for a new investigation of the 47-storey skyscraper, which collapsed on 9/11.
36 percent of all respondents are inclined to believe critics — among them are Architects and Engineers for 9/11 Truth (AE911Truth), which has gathered over 1,500 signatures from architects and engineers — who say the government?s account of Building 7?s collapse is `physically impossible.?? Its fall, maintain these architects and engineers who have professional experience in designing and building skyscrapers, was caused by `controlled demolition.?
36 percent of those polled say, we are `not satisfied that we know the whole truth about that day, and it is time to get to the bottom of what happened.?
The `whole truth? and `getting to the bottom of what happened? is inextricably linked to paradigms. What was it that Thomas Kuhn had said of paradigms?.? it constitutes the underlying assumptions and intellectual structure upon which research and development in a field of inquiry is based (The Structure of Scientific Revolutions, 1962). Others have spoken of it being an interpretative framework, one which is guided by a set of beliefs and feelings about the world and how it should be understood and studied (Egon G. Guba ed, The Paradigm Dialog, 1990).
`Blowback? — explains professor Chalmers Johnson, author of the trilogy Blowback (volume 1 published in 2001), an academic for 30 years who also worked as a consultant for the CIA (1967-1973) but later became best known for his powerful critique of American imperialism — is a CIA term. It means retaliation or payback. `By blowback we do not mean just the unintended consequences of events. We mean unintended consequences of events that were kept secret from the American public, so that when the retaliation comes, they have no way to put it into context. Just as after 9/11, you have the president saying, “Why do they hate us?” The people on the receiving end know full well that they hate us because of what was done to them. It’s the American public that are in the dark on that subject? (interviewed by Harry Kreisler, January 29, 2004). END_OF_DOCUMENT_TOKEN_TO_BE_REPLACED