I would kiss her on the lips and she would perk up and say “Ah, a real kiss”. Chotomami (little aunt) had always been special. Luise Morawetz-Rafique (1.1.1929 – 9.7.2013) was the only white person in our family, and we were naturally curious. My mama (mother’s brother) had many foreign friends, and I would occasionally be taken to the Dhaka Club, an old colonial club that I now avoid on principle. As a child, going to the swimming pool, having marshmallows and seeing naked white men changing in front of us, were all things that led to endless conversations amongst the rest of the kids. Chotomama and mami had two daughters Laila and Laeka and a son Akbar. We were all close in age, but Akbar and I, boys, mischievous and with boundless energy, were the closest of pals. We were also constantly fighting. The two girls were the heartthrobs of all the older boys, and I by being a close cousin and thus a stepping stone, got special treatment from the boys. They were fun days.

END_OF_DOCUMENT_TOKEN_TO_BE_REPLACED 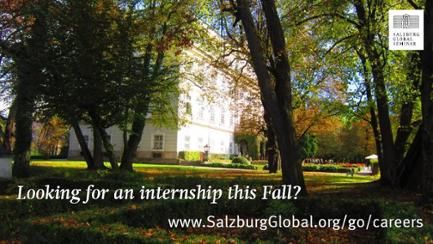 We’re looking for outgoing, organized and internationally-minded graduates for three-month internships here at Schloss Leopoldskron & Meierhof, Salzburg, Austria from September to December – our busiest time of year! Interns will spend three months networking, researching and helping facilitate cross-cultural dialogue on a wide range of international issues, from rethinking pharmaceutical drug approval, the future of the arts, and rural African enterprise development, to Middle Eastern political transitions, transformation of investment cultures and the use of social media in citizen-government dialogue.
CVs/resumes should be sent by *MAY 31st.*http://www.salzburgglobal.org/current/careers-b.cfm#SGSIP?Whilst our internships are unpaid, travel to and from Salzburg from wherever you are in the world will be covered, along with free full room and board at the Schloss for the duration of the internship.
Louise Hallman

The world’s largest image shows a 360 degree view of Vienna. Taken by photographer Julian Kalmar in July of this year and assembled from 3600 shots, the image would need 25,000 television sets to be viewed in full HD.