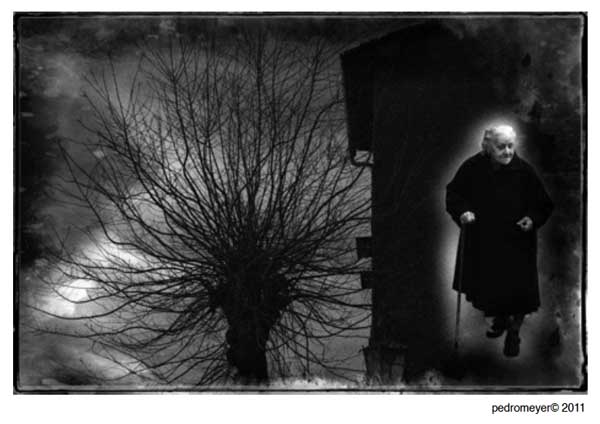 By Pedro Meyer
As we welcome the year 2011, it seems we are almost in the world of tomorrow, and still so many things have a thread to how we have always been.
Of course we have the internet which wasn’t in our lives just a few years ago, and of course we have social networks that also were not present in our lives earlier, nothing to say of being able to speak long distance to all my friends across the globe almost for free.
However, ageing has not changed at all. Maybe these days we wither a bit later, but withering none-the-less is part of our existence. Be that with nature around us, or ourselves. Yes, plants seem to be moving along with climate changes into uncharted?territory, but they don’t last forever, just as they didn’t before.
It used to be that I kept all my correspondence in folders, that is, in the analog era, I am talking about. All the letters from friends and family have been kept neatly stacked, over the years.
I have to admit that the volume of correspondence increased exponentially in the digital era, but what I though at some point was a very simple solution, that of keeping the archives for later retrieval, just as I did with my analog era correspondence, has proven to be an exercise in wishful thinking.
My digital files of the late nineties, are just about lost. With word processors having been superseded with new generations and functionalities, the files became unreadable. I am sure that some high tech outfit could find a way to unlock that information, but at what cost?
Along the years as I changed and moved from one computer to another, what I thought was a simple solution, like moving furniture from one place to another, as when you need to change residence, this turned out to be a less than stellar performance. OK, I was able to move the desk, but alas, where did the drawers I had in the desk and their content land? they seem to have gone to another world.
These days, moving between computers, and between programs, and now between these and social networks, I can’t even recall if the message I sent was over FaceBook, email, gmail, ichat, or what have you. I don’t remember if I responded from my cell?phone, from my iPad, my lap top, or my desk top computer. It all seems to have gone into a world of dispersion. I do hope that information again, on a cloud, be that the message was originated on what ever machine I had at hand at any given moment. Control-F, might become handy at such a juncture once again.
In that sense, ageing is a good thing, in that any process needs to mature before it can reach a stage of becoming more efficient or practical. As Charles De Gaulle would write: ” Nothing lasts unless it is incessantly renewed”.
I strongly believe that ageing is precisely that, the need to renew everything. We tend to look upon ageing as this need to hold onto something, probably life. When in fact life, flourishes precisely when we don’t hold on to it, but renewed constantly.
Probably the contradiction comes from the fact that I might have to loose, for someone else to gain someplace, and we don’t look fondly on the idea of loosing. Since this is going to happen, regardless of my better opinion, I believe we might as well not waste precious moments, chasing after false hopes, that somehow will not materialize, but instead concentrate on the constructive nature of ageing as seen from a wider perspective than just the I, as an individual.
If I manage to view myself in the larger construct of the world at large, I might not even have the feeling of being subject to a losing proposition, but rather the opposite. My fare is tied to a universal nature, as the yogi said to the hot dog vendor: “Make me one with everything”.