THE siege, so to speak, of the Drik Gallery by the police on Monday, to force cancellation of a photo exhibition on extrajudicial killings by acclaimed photographer and Drik managing director Shahidul Alam, not only undermined the right to freedom of expression enshrined in the constitution of the republic but also put the entire nation to shame. According to a report front-paged in New Age on Tuesday, the police, along with the Rapid Action Battalion and the Special Branch of police, had, from midday onwards, put pressure on the Drik management to not hold the exhibition on the ground that it did not have official permission and that it might cause ?unrest in the country?, before they cordoned off the gallery half an hour before the inauguration of the show. Subsequently, the organisers were forced to hold an impromptu inaugural ceremony on the road in front of the gallery.

The reasons cited by the police appear somewhat dodgy. As Shahidul Alam pointed out, Drik has been ?arranging shows since 1993 and no permission has ever been required.? Other galleries in the capital and elsewhere in the country would certainly make the same observations. In other words, even if there is a provision in the Dhaka Metropolitan Police ordinance that makes obtaining permission for an exhibition mandatory, neither the organisers of such exhibitions have deemed it necessary to comply with it, nor have the police themselves shown any urgency with regard to its enforcement. The question then is why the police deemed it invoke a provision that is seldom enforced. The answer may be found in the remark of an assistant commissioner of police quoted in the New Age report. ?The organisers did not obtain official permission although exhibitions on sensitive issues require prior permission,? he said.

Indeed, the issue that the Drik exhibition deals with, i.e. extrajudicial killings, is sensitive. It is, perhaps, more sensitive for the police and the Rapid Action Battalion because they are the prime perpetrators of such killings. It is, perhaps, equally sensitive for the government since it has not only failed to rein in the trigger-happy law enforcers despite widespread criticism and condemnation, at home and abroad, of extrajudicial killings and, most importantly, embargo by the highest judiciary but also appeared, of late, to be trying to justify such blatant violation of the rule of law by the supposed protectors of law. It is unlikely that the police acted on Monday beyond the knowledge of the government, which could only indicate that the incumbents may be even willing to foil any attempt at creating public awareness of, and thus mobilising public opinion against, extrajudicial killings, which is what the Drik photo exhibition appears to be. It is ironic that the ruling Awami League promised, in its election manifesto, to put an end to extrajudicial killings.

As indicated before, the police action not only was in contravention with the constitution but also put the entire nation to shame. The inauguration of the exhibition was scheduled to be followed by the launch of the Pathshala South Asian Media Academy, and the guest of honour was none other than celebrated Indian writer and human rights activist Mahashweta Devi. There were also celebrated personalities from some other countries. In other words, the police enacted the shameful episode in front of such an august gathering tarnishing, in the process, the image of the nation as a whole.

Police action against Drik exhibition:It undercuts people’s political and cultural rights
THE police action, stopping the Drik gallery exhibition of images relating to the incidents of ‘crossfire’ in Bangladesh, is a case of oppression and curtailment of our fundamental rights of freedom of expression, speech, information and cultural expression. On Monday, just before the exhibition was to be inaugurated by eminent Indian intellectual Mahasweta Devi, policemen positioned themselves before the gallery in Dhanmondi and simply refused to let anyone enter or come out of its premises. By way of explanation, they told the media that Drik gallery did not have permission to organise the exhibition.
The question of permission is totally uncalled for. There are hundreds of photo exhibitions and other such functions of public viewing happening everyday in the capital city. Did their organisers have to seek permission in each case to be holding these? Drik itself has been organising such events since 1993. Never was any permission required or sought or demanded by any agency. Exhibitions such as these have educative, informational and instructive values. Free flow of ideas helps enrich intellectual wealth of the country, broadens its outlook and enhances the level of tolerance in a society of contrary or dissenting views. There may be a debate on an issue but it doesn’t mean people on one side of an issue need not hear or refuse to see the other’s point of view.
This is exactly the level of maturity we crave for and have actually reached in certain areas of national life which must not be allowed to be undone through any ham-handed act of indiscretion. If the police become the arbiter of what is right and what is wrong for our society, then God help us.
Let certain facts be made clear. Democracy entails a guarantee and preservation of the political and cultural rights of citizens. In such a setting, the sensitivities of certain individuals or groups or bodies cannot override the bigger demands of an open, liberal society which the present government espouses as policy. Now, if the police or any other agency is upset at a revelation of the sordid truth that ‘crossfires’ have been, they should be making sure that such extra-judicial killings do not recur. The fault lies not with Drik gallery that it organised the exhibition. It lies in the inability or reluctance of the authorities to dig into the question of why ‘crossfire’ killings are today a reprehensible affair. Besides, why must the authorities forget that by preventing what they think is adverse publicity for the country they are only making it more pronounced before the nation and the outside world?
We condemn the police action. And we would like the home minister to explain to citizens how such acts that clearly militate against the people’s right to know and observe and interpret conditions can at all take place.

23 March 2010
Bangladesh: Lift ban on extrajudicial killings exhibition. Amnesty International is urging the Bangladeshi authorities to lift a ban on an exhibition of photographs raising awareness about alleged extrajudicial executions carried out by a special police unit.
?Yesterday?s closure of the Drik Picture Library exhibition ?Crossfire? in Dhaka is a blow to the right to freedom of expression,? said Amnesty International?s Bangladesh Researcher, Abbas Faiz. ?The?government of Bangladesh must act immediately to lift the police ban and protect the right to peaceful expression in words, images or any other media in accordance with Bangladesh?s constitution and?international law.?
Hours before the ?Crossfire? exhibition was due to open at a special ceremony in Dhaka, police moved in and demanded that the organizers cancel it. When they refused to shut it down police closed the?premises, claiming that the exhibition had no official permission to open and would ?create anarchy?.
The exhibition includes photographs based on Drik?s case studies of killings in Bangladesh, which government officials have portrayed as deaths in ?crossfire?.
Hundreds of people have been killed in Bangladesh since 2004 when the special police force, the Rapid Action Battalion (RAB), was established.
In most cases, victims who die in the custody of RAB and other police personnel, are later announced to have been killed during ?crossfire? or police ?shoot-outs?.
Amnesty International and other human rights organizations consider these killings to be extrajudicial executions.
Human rights lawyers in Bangladesh see the closure of the exhibition as unjustified and with no legal basis. They are seeking a court order to lift the police ban on the exhibition.
Drik?s Director, Shahidul Alam says he has held hundreds of other exhibitions without needing official permission, and that ?the government invoked a prohibitive clause only because state repression?was being exposed?.
Abbas Faiz said:?By closing the ?Crossfire? exhibition, the government of Bangladesh has effectively reinforced a culture of impunity for human rights violations. Amnesty International is calling for the?government to take action against those who carry out extrajudicial executions, not those who raise their voices against it.?
The ban is also inconsistent with Prime Minister Sheikh Hasina?s pledges that her government would take action to end extrajudicial executions.
Amnesty International is urging authorities to allow peaceful protests against the killings and to bring the perpetrators to justice.
END/
News in USA 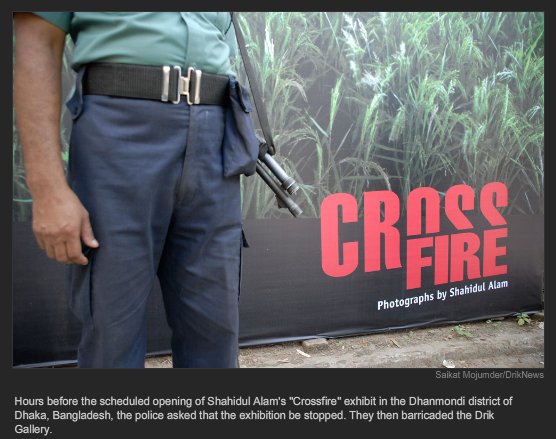 Shahidul Alam had hoped his ?Crossfire? exhibit on extrajudicial killings in Bangladesh would ?shock people out of their comfort zone? and provoke a response.
He got his wish.
Minutes before the show was to open on Monday afternoon, the police shut down his gallery in the Dhanmondi district of Dhaka.
But instead of stifling public debate, the government?s action has had the opposite effect: art students have formed a human chain at the university and lawyers are preparing to bring legal action to reopen the show.
?It really has galvanized public opinion,? Mr. Alam said in a telephone interview on Tuesday from southern Bangladesh. ?People were angry and ready ? they just needed a catalyst. The exhibit has become in a sense iconic of the resistance.?
The photography exhibit was a symbolic treatment of the wave of executions carried out by the Rapid Action Battalion, an anticrime squad whose many critics say that it engages in violent social cleansing.
Rather than document actual killings ? something already done at great length by groups like Human Rights Watch ? Mr. Alam created a series of large, moody prints that touched on aspects of actual cases.
[Lens published a post and slide show, “Where Death Squads Struck in Bangladesh,” on March 16.]
Although the killings have drawn international condemnation, they have continued, despite promises by the government to rein in the battalion. Mr. Alam, a photographer, writer and activist, had hoped that his track record and international reputation would offer the ?Crossfire? show some protection.
But the police and officials from the battalion began to put pressure on him around midday, according to a press release from the gallery, insisting that the exhibit did not have the necessary official permission. As the 4 p.m. opening hour approached, the police closed the gallery, saying the show would create ?anarchy.?
With the gallery closed, Mr. Alam, his associates and invited guests put on an impromptu exhibit outside the gallery. The government?s intrusion ? without any apparent court order ? was denounced as illegal.
?The forcible closure of Drik?s premises is a blatant violation of our constitutional rights,? Mr. Alam said in a statement. ?We call upon the government to immediately remove the police encirclement, so that the exhibition can be opened for public viewing, and Bangladesh?s image as an independent democratic nation can be reinstated.?

2 thoughts on “Siege of Drik Gallery”