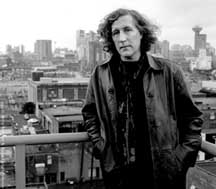 and gentrification has become a central characteristic
of what neil smith perceives as
?a revengeful and reactionary viciousness
against various populations accused of ?stealing? the city
from the white upper classes?
and this viciousness and violence
brought to the downtown eastside
by friendly predators
such as builders planners architects landlords bankers and politicians
is like violence brought to our community
by other predators
by johns and oblivion seekers
by sensationalizing journalists
by arrogant evangelizing Christians
predators like
developers and real estate agents
who remind of no one so much
as gilbert Jordan
the serial killer
who came down here repeatedly
and seduced bribed and bullied
10 native women
into drinking alcohol until they were dead
and one woman
revived after a night with jordan
though pronounced dead on arrival
at st pauls hospital
described jordan as
?a real decent-looking person
very mild-mannered
a real gentleman
he looked like a school teacher
white shirt and tie
I trusted him?

the word ?hebrew? originally designated not a racial class
but a social class
of despised drifters and outcasts
who existed on the margins of middle eastern cultures
and those advocates
those ancient hebrew prophets said
?the wealthy move the boundaries
and the poor have to keep out of the way
the poor spend the night naked, lacking clothes
with no covering against the cold
the child of the poor is exacted as security
from the city comes the groan of the dying
and the gasp of the wounded crying for help
damn those who destroy the huts of the poor
plundering their homes instead of building them up
those who tear the skin from off our people
who grind the faces of the poor
who join house to house
who add field to field
until there is room for no one but them
those who turn aside the way of the afflicted
who trample upon the oppressed?

and the native prophets of the americas who said
?when these times arrive
we will leave our homes like dying deer
the land will be sold and the people will be moved
and many things that we used to have in this land
will be taken from us
we have been made to drink
of the bitter cup of humiliation
they have taken away our lands
until we find ourselves fugitives vagrants and strangers
in our own community
our existence as a distinct community
seems to be drawing to a close
our position may be compared
to a solitary tree in an open space
where all the forest trees around have been prostrated
by a furious tornado?

a first nations? man recently told me
he had come to the downtown eastside to die
he heard the propaganda that this is only a place of death disease and despair
and since his life had become a hopeless misery
he came here specifically to die
but he said
since living in the downtown eastside
what with the people he has met
and the groups he has found
he now wants very much to live

our words
like bolts of lightning in a dark night
lighting our way
our words
like tears like rain like cries like hail from our hearts
feeling with each other in our suffering for each other
our words
angry as thunder exploding in the ears of those
who would ignore or dismiss or inflict upon us
what they in their ignorance think is best for us
our words defiant as streetkids in a cop?s face
our words
brilliant and beautiful as the rainbow I saw
spanning our streets
our words
of resistance and comfort and commitment
like mountains
our words
prophetic on behalf of the hard-pressed poor

for as one prophet said
?when all is dark the murderer leaves his bed
to kill the poor and oppressed?

our words
to block the murderers? paths

still our words and presence create
a strange and profound and strong unity
as in memory of
the long hard nerve-wracking battles we?ve fought
for the carnegie centre
against the casino
for crab park
against brad holme
for zero displacement by-laws
against hotel evictions
for poor people living in woodwards
against condominium monstrosities
and for our very name
the downtown eastside
removed from city maps
the most stable community and neighbourhood in Vancouver
suddenly disappeared
but recovered through struggle
our name reclaimed
but the meetings
the pressure

how much compromise?
how to organize?
where to fight?
more sirens and screams and break-ins
welfare cuts
more murders and suicides
more bodies on the sidewalks and in the alloys and parks
space and places for poor people shrinking
and the ambiguities of advocacy
the rumours
the well-founded paranoias
the political manipulations
exploitations confusions deliberate obfuscations
and seductions of the gentrification system
the backroom deals somewhere else
in office towers and government offices
meetings and more meetings
and yet
beneath the ostensible reason
for attending another goddamned meeting
is that which truly holds us together
holds and has held every real community together

love
not as passive abstraction or a commodity privatized
but love
as fiery personal and collective social justice passion
love as in our public celebrations
love as in our public grieving
love going past fatigue again
love taking risks in the face of uncertainty
love as stubbornness sticking to community principles
love as willingness to go one more length
to make one more leaflet
love sitting down together one more time
love saying hello to hate and fear and goodbye
love as resistance tolerance and acceptance
love
for this poor beloved community reeling from global upheavals
love
taking on the consequences of a system producing
more wounded
more damaged
more excluded
more refugees
more unemployed and never-to-be-employed
and love?s
immense capacity to care
and love as courage

like the other day near main and hastings
an old white man headed across hastings
in the middle of the block
traffic roared and blasted in both directions
the old man was using a cane and moving very slowly
his eyes fixed somewhere beyond
it sure looked like he?d never make it
but would become
another vehicular maiming or death down here
and then a native fellow
waiting at the bus stop
like a matador dodging furious bulls
dodged into the traffic
and stopped it
using his body as a shield
and escorted the old white man
safely to the curb

?the real estate cowboys ? also enlisted the cavalry of city government for
? reclaiming the land and quelling the natives, in its housing policy,
drug crackdowns, and especially in its parks strategy, the city devoted
its efforts not toward providing basic services and living opportunities
for existing residents but toward routing many of the locals and
subsidizing opportunities for real estate development?
wrote neil smith about the lower east side of new york

I remember attending a kind of gentrification summit
called by a vancouver city planner
to examine the city?s victory square redevelopment plan
david ley jeff sommers nick blomley and chris olds
reached a similar conclusion
the plan does nothing to prevent
displacement and gentrification
but when recently reminded of this verdict
the city planner still pushing his plan said
?I don?t care if god and david ley ??

and that?s just it
the necessity for heeding
the prophetic blast and rallying cry
delivered by larry campbell
now the provincial coroner
in the carnegie centre last summer

raise shit against the kind of ?urban cleansing?
gentrification unleashes
it?s a war
against the poorest of the poor
1000 overdose deaths in the downtown eastside in 4 years
highest rate and number of suicides in vancouver
lowest life expectancy for both men and women
fatal epidemics of aids and hepatitis c
and lack of humane housing
identified as a major factor
in all this violence against us

raise shit
when a friend of mine a gay native man tells me
?I?ll try anything to get a decent home
I?m gonna become a mental case
I?ll even go into an institution
if it?ll help me get a decent home?

raise shit
when both young people and hardcore addicts either deliberately infect
themselves with h.i.v. or take no precautions to prevent infection so that
they have a better chance at obtaining housing income health care and
meals

raise shit
when a city cop in a newspaper column says ?the locals were at their best
fighting and howling? and calls drug addicts
?vampires?

raise shit
when a city planner involved with the convention centre scam says ?the
voters of vancouver can easily live with 20 to 25 000 homeless people and
not even notice it?

and when I think of raising shit
I think of this basketball team I once played on
composed of middle-aged beat-up alcoholics and addicts
from the streets
who?d been sober for awhile
and we entered a city recreational league
against teams that were
younger stronger faster healthier and more skilled
and though we lost most games by a large margin
we determined that
no matter what the score
each hotshot team we played would know

by their fatigue and sweat and bruises
that they had been in a game
that they were up against an opponent
we knew we couldn?t out jump or outrun those teams
but we sure could raise shit
better than they could
and amazingly we actually won a few games

One thought on “Raise Shit”