Kazi Imtiaz Hossain Abir, a student of higher secondary level at the Northern College at Mohammadpur was killed in a so called “Cross Fire” in the capital. Apart from ‘why’ he was killed the question is now where Abir was killed?
There are inconsistencies in the documents related to Abir’s extrajudicial killing. The police submitted a “Death Certificate” with its forwarding placed before the Chief Metropolitan Magistrate Court of Dhaka through the Deputy Commissioner (Prosecution), a police officer, of the Metropolitan Court. The Death Certificate was issued by Dr. Nurul Islam of the National Institute of Trauma and Orthopedic Rehabilitation (NITOR) of Dhaka. It does not assert the cause of death although it mentions that “there is a penetrating injury on the medial aspect of the right lower thigh about (2cm X 2cm)”.
This differs from the police report by the Investigating Officer (IO) Sub Inspector (SI) Mr. Hekmat Ali in both the age and time of death. More significantly the report states that he was sent for treatment of his bullet wounds.
While the entire document was composed in a computer, the crime scene was penned, in all three cases.
So where was Abir killed?
The Pallabi police filed three cases against Abir naming him as the accused with four-five unidentified persons. FIR no. 27 sates that the a police patrol team went to Balurmath area, when they came across indiscriminate gunshots. They immediately returned fire in self-defence. All the “terrorists” fled the scene and hid in darkness. They found one critically-injured person, who was bleeding at the time from his bullet wounds. He was holding a revolver in his right hand. The person told the officers his name as “Abir (28)” before losing consciousness. The police took signatures from the three “witnesses” on the seizure list. They claim that ASI Ismail and constable Saidur were injured (without any details about their injuries) and received first aid from “Adhunik Hospital”, which referred them to the Rajarbag Police Hospital for further treatment. 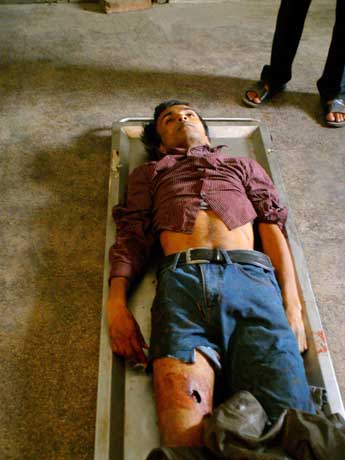 FIRs no. 28 and FIR no. 29 were made in the same language by SI Md. Yasin Munshi and SI Md. Ezajul Islam, using identical text but under different sections of the Penal Code-1860. Professionals related to the forensic examination of dead bodies told the human rights defenders that the shot fired at Abir’s right thigh had been done at close range.
Abir’s relatives said that Abir’s cell phone has not been returned to the family and is not included in the seizure list. They did not even register a complaint regarding the extra judicial killing, asking instead ?have authorities ever prosecuted any personnel of the law-enforcement agencies despite the fact that a large number of innocent persons have been murdered?? They argued that there are a number of wanted criminals in the city whom the people want to see behind bars. They want legal action against the police who have failed to arrest them for years. They demand answers as to why an innocent student, who did have not a single complaint against him with any police station or court of the country, should be killed and publicized as a robber. Does the government ever feel how deeply shocked and infuriated people are about these lawless murders by the government’s own agents?
Even recently the prime minister has spoken out against extra judicial killings. The foreign minister has said extrajudicial killing have become almost part of the system and it cannot be changed overnight.
The Home Minister Sahara Khatun in public blamed human rights organizations for “siding with the criminals” and claimed that no extra-judicial killing has taken place during the tenure of the present government.
Also available at countercurrents

One thought on “Questions for police”