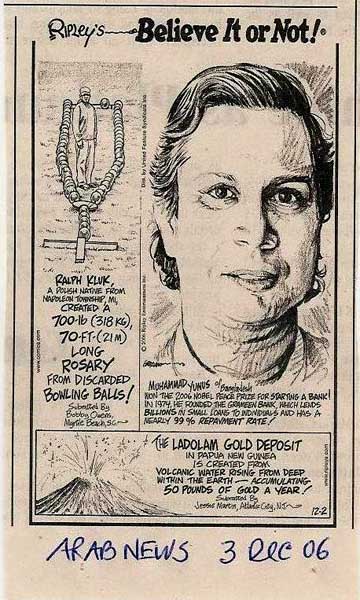 Today, I want to talk about the fickle nature of our hero syndromes. But first, people will ask: “Yes, yes, but where do you really stand?” So, let’s get that over with in the first paragraph. Based on the public documents, Grameen Bank acknowledges transferring funds from one entity to another to reduce tax liabilities and support that entity. The transfer helped the overall picture of “Grameen” entities — a fund surplus in one area moved to the deficit zone. Not a novel practice. But not informing the donors? Bad decision and terrible policy.
Tom Heinemann’s signature is the “aha, caught you” documentary. From Bitter Taste of Tea to the investigation of Telenor’s outsourcing practices in Bangladesh. But this time the target is bigger, as the spiraling reaction to his film shows. Whether the transfer was “notional,” whether Norwegian donors give Grameen a clean chit, becomes almost irrelevant. The damage is the first screamer headline: “siphoning.” No one has attention span for long news cycles.
The Grameen Bank script could have simply been of the Chittagong economist who modified existing economic models and grew it to global scale. But the universal desire for a “wise man of the east” narrative inserted a highly personalised, Gandhian ethos into the project. In an uber-cynical age, such saintly stories have a predictable arc — the rise and fall. The bullseye is proportionate to the halo.
A Yunus-centric Grameen Bank story has created a problem of succession and leadership. When the Heinemann story broke, senior managers like Muzammel Huq and Khalid Shams and Dipal Barua, who had been with the Bank for decades, were no longer there. The person left to face the media was the woefully unprepared M. Shajahan. Maybe he’s a good daily administrator (I don’t know), but under the klieg lights of television he was frozen. Road-kill on the “scandal” highway.
Microcredit started as a solid concept. Grameen succeeded in developing a business model, targeted sharply on the bottom poor and women. An enhancement and successor to Akhtar Hamid Khan’s two tier co-op in the 1960s, and the government’s “Integrated Rural Development Programme” of the 1970s. But far more self-financing and successful than those earlier experiments.
Global ambitions pushed expansion to an epic scale, and within that scale is the Achilles heel. Until the mid-’90s, the Bank was relatively small, motivation of staff was strong, and credit was well supervised. Then international attention exploded and the microcredit dam broke. Grameen Bank became gigantic and extremely difficult to manage, and hundreds of large and small microfinance institutions also entered the fray.
As documented extensively in research studies, the larger the microcredit movement became, the wider its exposure to those borrowers who could not generate enough earnings and therefore might default. A cycle began: some borrowers took out new loans to cover existing loans, getting stuck in a feedback loop. Other borrowers defaulted, creating more pressure on existing loans.
The more famous Dr. Yunus became, the more he travelled abroad, the more the absence of a strong management in Dhaka to get things under control. And here the lack of seasoned managers (the Huq and Shams of early years) was acutely felt. There was no one to enforce rectification, reduction — a good dose of micromanagement to get fundamentals in order.
The flaws of the microcredit model have been analysed by Lamia Karim, Anu Muhammed, Omar Tareq Chowdhury and others. But Grameen Bank’s response has been to ignore or steamroller the critique. But now comes Heinemann’s fairly average documentary, and as Afsan Chowdhury once remarked about the arsenic crisis, it’s when the western/white narrator arrives that issues finally become “important.”
The state machinery has taken up aggressive positions. The public disagreement between the finance minister and the prime minister gave everyone signals and marching orders. Dr. Yunus’ election foray in the early days of 1/11 laid the course for this unraveling as well. I would not expect the Awami League to forgive that political adventure, and some payback seems inevitable.
Robust economic critique and a push for reform are always needed. But there’s a parallel stream of glee here. Schadenfreude is joy at the distress of others. Blood in the water and others want a bite. The chatter in town is sprinkled with “bhalo hoise,” “bujho thela” and “ekhon khela shesh.”
I’m remembering the grand reception at China-Bangla Moitree Shommelon Kendra. That huge reception after the Nobel Prize. It seemed everyone in shushil Dhaka was there (you were there too, don’t deny it). People crowded around the honey-pot during fame times. I wonder what happened to that crowd, the multitude? Very few of those people seem to be stepping forward to defend Grameen Bank, even a little. Nobody wants to say: the Bank made mistakes, the model has flaws, things need to change, but this can’t become a personal crucifixion.
Humayun Azad once wrote: “When Bengalis wants to lift someone up, they lift him to the skies. And when they want to bring him down, they rip him down into the mud.” The secret pleasure over the controversy speaks volumes about the crowd. I’m reminded of the nihilistic dance at the end of Lord of the Flies: “Kill the beast! Cut his throat!”
The visceral and poisonous thrill of communal bloodletting.
Naeem Mohaiemen is a member of Drishtipat Writers’ Collective.