May 6, 2011
We might ask ourselves how we would be reacting if Iraqi commandos landed at George W. Bush?s compound, assassinated him, and dumped his body in the Atlantic.
By?Noam Chomsky 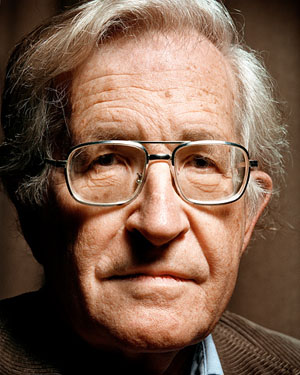 It?s increasingly clear that the operation was a planned assassination, multiply violating elementary norms of international law. There appears to have been no attempt to apprehend the unarmed victim, as presumably could have been done by 80 commandos facing virtually no opposition?except, they claim, from his wife, who lunged towards them. In societies that profess some respect for law, suspects are apprehended and brought to fair trial. I stress ?suspects.? In April 2002, the head of the?FBI,?Robert Mueller, informed the press that after the most intensive investigation in history, the?FBI?could say no more than that it ?believed? that the plot was hatched in Afghanistan, though implemented in the?UAE?and Germany. What they only believed in April 2002, they obviously didn?t know 8 months earlier, when Washington dismissed tentative offers by the Taliban (how serious, we do not know, because they were instantly dismissed) to extradite bin Laden if they were presented with evidence?which, as we soon learned, Washington didn?t have. Thus Obama was simply lying when he said, in his White House statement, that ?we quickly learned that the 9/11 attacks were carried out by al Qaeda.?
Nothing serious has been provided since. There is much talk of bin Laden?s ?confession,? but that is rather like my confession that I won the Boston Marathon. He boasted of what he regarded as a great achievement.
There is also much media discussion of Washington?s anger that Pakistan didn?t turn over bin Laden, though surely elements of the military and security forces were aware of his presence in Abbottabad. Less is said about Pakistani anger that the?U.S.?invaded their territory to carry out a political assassination. Anti-American fervor is already very high in Pakistan, and these events are likely to exacerbate it. The decision to dump the body at sea is already, predictably, provoking both anger and skepticism in much of the Muslim world.

It?s like naming our murder weapons after victims of our crimes: Apache, Tomahawk? It?s as if the Luftwaffe were to call its fighter planes ?Jew? and ?Gypsy.?

We might ask ourselves how we would be reacting if Iraqi commandos landed at George W. Bush?s compound, assassinated him, and dumped his body in the Atlantic. Uncontroversially, his crimes vastly exceed bin Laden?s, and he is not a ?suspect? but uncontroversially the ?decider? who gave the orders to commit the ?supreme international crime differing only from other war crimes in that it contains within itself the accumulated evil of the whole? (quoting the Nuremberg Tribunal) for which Nazi criminals were hanged: the hundreds of thousands of deaths, millions of refugees, destruction of much of the country, the bitter sectarian conflict that has now spread to the rest of the region.
There?s more to say about [Cuban airline bomber Orlando] Bosch, who just died peacefully in Florida, including reference to the ?Bush doctrine? that societies that harbor terrorists are as guilty as the terrorists themselves and should be treated accordingly. No one seemed to notice that Bush was calling for invasion and destruction of the?U.S.?and murder of its criminal president.
Same with the name, Operation Geronimo. The imperial mentality is so profound, throughout western society, that no one can perceive that they are glorifying bin Laden by identifying him with courageous resistance against genocidal invaders. It?s like naming our murder weapons after victims of our crimes: Apache, Tomahawk? It?s as if the Luftwaffe were to call its fighter planes ?Jew? and ?Gypsy.?
There is much more to say, but even the most obvious and elementary facts should provide us with a good deal to think about.
Copyright 2011 Noam Chomsky
________________________________________________________________________
Noam Chomsky is Institute Professor emeritus in the?MIT?Department of Linguistics and Philosophy. He is the author of numerous best-selling political works. His latest books are a new edition of?Power and Terror ,?The Essential Chomsky (edited by Anthony Arnove), a collection of his writings on politics and on language from the 1950s to the present,?Gaza in Crisis , with Ilan Papp?, and?Hopes and Prospects, also available as an audiobook.