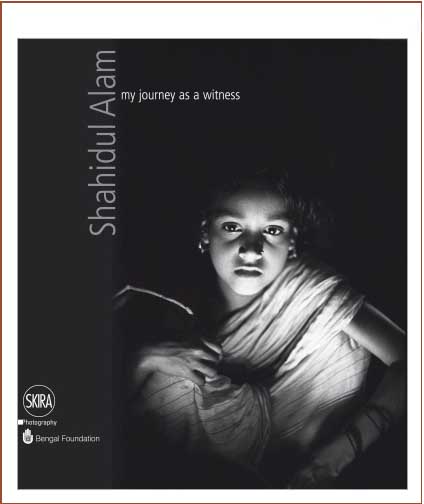 Shahidul Alam: My Journey as a Witness

An insight into the evolution of one of the most significant movements in contemporary photography, through the eyes and voice of the man who shaped it. An extraordinary artist, Shahidul Alam is a photographer, writer, activist, and social entrepreneur who used his art to chronicle the social and artistic struggles in a country known largely for poverty and disasters.
Lucid and personal, this much-awaited book includes over 100 photographs tracing Alam?s artistic career, activism, and the founding of photography organizations. From early images shot in England to photographs of the last two decades in his native Bangladesh, this is a journey from photojournalism into social justice. Alam?s superb imagery is matched by his perceptive accounts, at once deeply intimate and bitingly satirical.

Shahidul Alam, profoundly influenced by inequality in his native Bangladesh and The Liberation War, pursued a life in photography to challenge oppression and imperialism in all its forms. Attacked, arrested, and threatened with death, Alam built what many consider to be the finest photography school in the world, an award-winning agency, and the world?s most diverse photography festival. Widely celebrated, Alam claims as his achievements not the awards and exhibitions but the people he has trained and the lives he has transformed.?Rosa Maria Falvo is a writer and curator, and Skira?s international commissions editor, specializing in Asian contemporary art.
Introductions by:
Sebasti?o Salgado
Shahidul has managed to create a community, giving it a framework and creating links, as he has already done in Bangladesh. This is not merely another virtual community, like so many others, which have undoubtedly demonstrated their utility, but a truly concrete ensemble, which is a composite of all generations attached to their native soil, who share a much vaster territory than that of any one country. The territory I speak of is, of course, the photographic world of Shahidul Alam, which is also mine, as well as each and every one of ours. A world where we can daily sense our conscience and our faith in our planet.
and
Raghu Rai
In India we have many more photographers, some of them very good, and there are many galleries for art and especially photography. As well as reputed newspapers and magazines ? much is happening on many levels. But we don?t have a Shahidul Alam, who can combine them into a cohesive social and creative force.
The book was launched in Dhaka on the 23rd September 2011
The touring version on the exhibition will open at the Wilmotte Gallery (formerly Patrick Litchfield’s studio) in London on the 6th October 2011
The London launch (Grand Hyatt Churchill) will take place on the 10th October 2011
The New Delhi launch (Habitat Centre) will take place on the 15th October 2011
The New York launch (Rizolli Book Store) is on the 10th November 2011
A trailer for the book:

17 thoughts on “My Journey as a Witness”