ISHWARDI, Bangladesh ? The air thickened with tear gas as police and paramilitary officers jogged into the Ishwardi Export Processing Zone firing rubber bullets and swinging cane poles. Panicked factory workers tried to flee. A seamstress crumpled to the ground, knocked unconscious by a shot in the head. 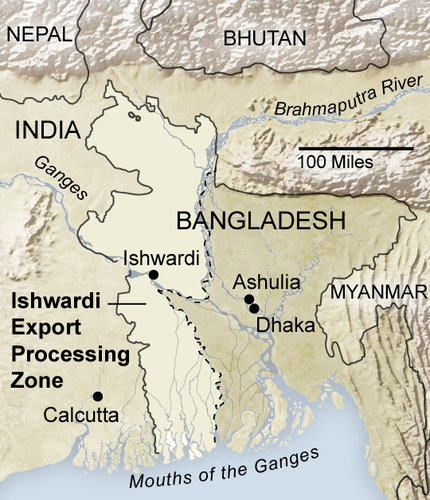 Dozens of people were bloodied and hospitalized. The officers were cracking down on protests at two garment factories inside this industrial area in western Bangladesh. But they were also protecting two ingredients of a manufacturing formula that has quietly made Bangladesh a leading apparel exporter to the United States and Europe: cheap labor and foreign investment.

Both were at stake on that March morning. Workers earning as little as $50 a month, less than the cost of one of the knit sweaters they stitched for European stores, were furious over a cut in wages. Their anger was directed at the Hong Kong and Chinese bosses of the two factories, turning a labor dispute into something potentially much larger.

?If any foreigner got injured or killed, it would damage the country?s image around the globe,? said a police supervisor, Akbar Hossein, who participated in the crackdown. ?We all know the importance of these factories and this industry for Bangladesh.?
Bangladesh, once poor and irrelevant to the global economy, is now an export powerhouse, second only to China in global apparel exports, as factories churn out clothing for brands like Tommy Hilfiger, Gap, Calvin Klein and H&M. Global retailers like Target and Walmart now operate sourcing offices in Dhaka, the capital. Garments are critical to Bangladesh?s economy, accounting for 80 percent of manufacturing exports and more than three million jobs.

But with ?Made in Bangladesh? labels now commonplace in American stores, Bangladesh?s manufacturing formula depends on its having the lowest labor costs in the world, with the minimum wage for garment workers set at roughly $37 a month. During the past two years, as workers have seen their meager earnings eroded by double-digit inflation, protests and violent clashes with the police have become increasingly common.
In response, Bangladeshi leaders have deployed the security tools of the state to keep factories humming. A high-level government committee monitors the garment sector and includes ranking officers from the military, the police and intelligence agencies. A new special police force patrols many industrial areas. Domestic intelligence agencies keep an eye on some labor organizers. One organizer who had been closely watched, Aminul Islam, was found tortured and killed in April in a case that is unsolved.

?The garment industry is No. 1 for exports and dollars for the country,? said Alonzo Suson, who runs the Solidarity Center in Dhaka, an A.F.L.-C.I.O.-affiliated labor rights group. ?Any slowdown of that development is a national security issue.?
For the Obama administration, which has cultivated Bangladesh as a regional ally in southern Asia, labor unrest has become a matter of growing concern. In a May visit to Dhaka, Secretary of State Hillary Rodham Clinton raised labor issues and the Islam murder case. In June, Ambassador Dan W. Mozena warned Bangladeshi garment factory owners that any perception of a rollback on labor rights could scare off multinational brands and damage the garment industry. ?These developments could coalesce into a perfect storm that could threaten the Bangladesh brand in America,? he said.
For global brands, which are forever chasing the cheapest labor costs from country to country, Bangladesh has been a hot spot, especially as wages have risen in China. McKinsey, the consulting giant, has called Bangladesh the ?next China? and predicted that Bangladeshi garment exports, now about $18 billion a year, could triple by 2020.
But in late July, representatives from 12 major brands and retailers, alarmed by the rising labor unrest, prodded the Bangladeshi government to address wage demands, a suggestion rejected by the labor minister. ?No reason to be worried,? Khandker Mosharraf Hossain, the minister, told reporters, noting that brands were not canceling orders.
Bangladesh was born in bloodshed during a 1971 war of independence from Pakistan and has since gyrated between military rule and fragile democracy. It has about 150 million people and is one of the most densely populated countries in the world. Derided by Henry A. Kissinger as the world?s ?basket case,? Bangladesh has since made considerable progress on fronts like women?s literacy, juvenile and maternal mortality, per capita income, and life expectancy.
This upward arc is often credited to Bangladesh?s vibrant civil society, but the garment sector, in which about 80 percent of the workers are women, has also played a critical role, providing socially acceptable jobs to women in a conservative Muslim country. Prime Minister Sheikh Hasina, in lobbying the United States for favorable trade preferences, has argued that such policies would improve the lives of millions of poor women.
Bangladesh?s Home Ministry, in a written response to questions, said the government does not favor factory owners over workers but acts as a ?referee/umpire? while maintaining an ?investment friendly? environment for foreign and domestic investors.
Yet Ms. Hasina?s government has resisted expanding labor rights in a country where the owners of about 5,000 garment factories wield enormous influence. Factory owners are major political donors and have moved into news media, buying newspapers and television stations. In Parliament, roughly two-thirds of the members belong to the country?s three biggest business associations. At least 30 factory owners or their family members hold seats in Parliament, about 10 percent of the total.
?Politics and business is so enmeshed that one is kin to the other,? said Iftekharuzzaman, director of Transparency International Bangladesh.?There is a coalition between the sector and people in positions of power. The negotiating position of the workers is very, very limited.?
A Country Within a Country
Mohammad Helal Uddin joined Rosita Knitwear in May 2010 and was thrilled to have the job. Rosita was inside the new Ishwardi Export Processing Zone, not far from his home village, meaning he could live with his wife and two young daughters and not have to toil in the fields. ?I feel I have a kind of dignity in this job,? he said.

Mr. Uddin, 28, worked in the knitting department and after six months was promoted, with a base salary of $55 a month. He soon began to notice irregularities. Workers were not getting promised annual raises, monthly attendance bonuses or the 17 paid holidays a year, beyond their usual one day off a week. Employees also said they worked four hours of overtime a day but were paid for only two.