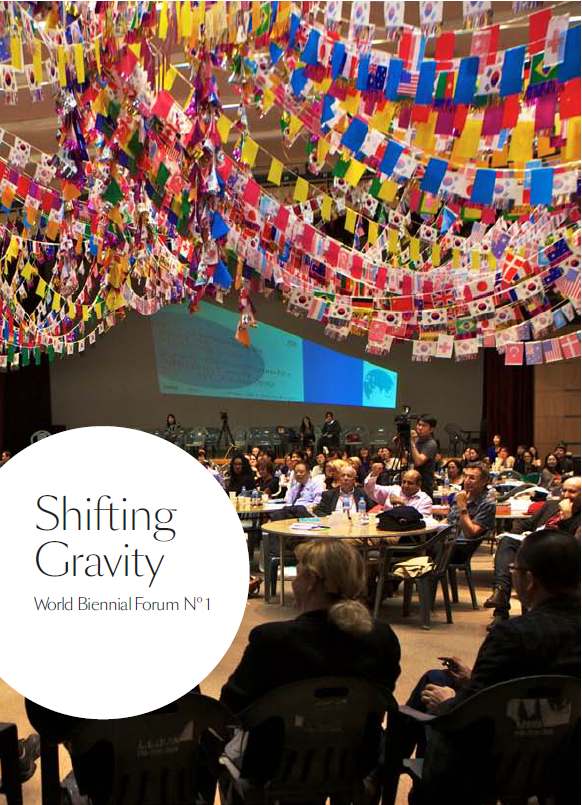 The Gwangju Biennale Foundation is pleased to invite you to the launch of the book?Shifting Gravity on the 30th of May at Hotel Monaco & Grand Canal in Venice, Italy. This?book, published by the Gwangju Biennale Foundation and Hatje Cantz, presents the issues,?discourses, and practices that have been evolving over the past 20 years with the?development of biennials around the globe.
The catalyst for this publication was the World Biennial Forum No.1, an international forum?held in Gwangju, South Korea in October 2012. The forum and publication were organized?through the collaboration of the Gwangju Biennale Foundation, the Biennial Foundation,?and the ifa (Institut f?r Auslandsbeziehungen). During the five-day forum, directors and?representatives of biennials and a number of professionals discussed a wide range of?issues regarding biennials and their meaning as a global cultural phenomenon.
Shifting Gravity is composed of three main essays on the theme of biennials and thirty-nine?essays on different biennials held around the globe. Ute Meta Bauer and Hou Hanru, the?directors of the forum, took on the role of editors for the publication of the book.
Chobi Mela is one of the biennales featured.
For RSVP please contact:?Serene Pac