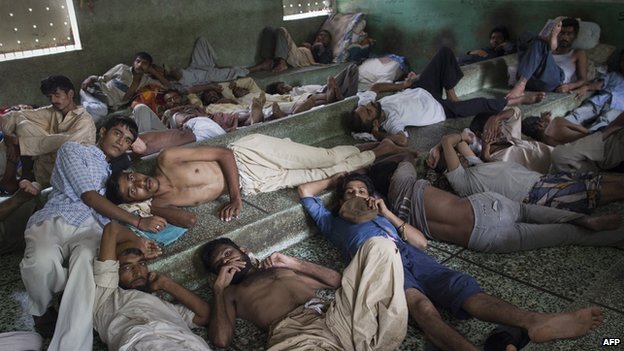 The UN estimates there are around half a million chronic heroin users in Pakistan, with many living in the country’s biggest city Karachi. But help for addicts is in short supply, and locking them up is one of the only forms of treatment.
The street outside Zainab market in Karachi is a great place for people-watching. Everyone has a story. A moment of eye contact can inspire an entire imagined history. Traders, customers, students – and heroin addicts.
It is here I talked to 26-year-old Hussain. With him there is no need to imagine. All dark skin and scars, Hussain has been plagued by addiction most of his adult life.
His face is resigned, as if the universe has conspired against him. He is at an all-time low in a life that has already reached some very dark depths.
“I want to be the man I used to be, to be happy again,” he cries. “What am I supposed to do? I just want to die.”

When I first met Hussain a few weeks earlier, things seemed more hopeful. He and his brother Yusaf were at a rehab centre run by the Edhi Foundation – a Karachi based charity.

Hussain said his addiction had ruined everything, so in an attempt to get his life in order he had summoned all his strength to drag himself and Yusaf into rehab.
“I have a son. He gets angry and calls me a druggy. I have to give up for him,” he told me.
“My family have said I have to choose between heroin and them. I’ve told them I’ll give up heroin.” 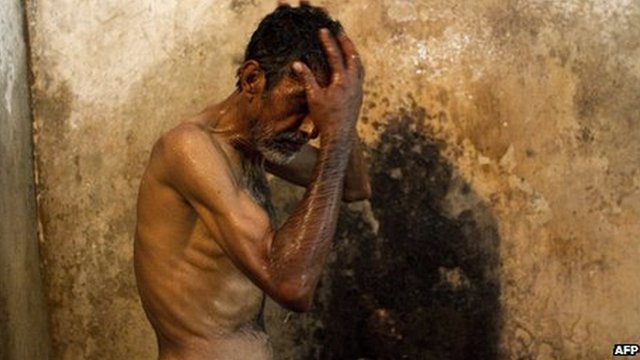 The Edhi Foundation treats about 4,500 addicts at any one time

Yusaf is like Hussain’s shadow. Speaking to them together, Yusaf nods when his brother does and often repeats the end of Hussain’s sentences.
The first day I meet them they are both going through withdrawal. Their bodies shake and they tell me they feel like they are covered in “fire and needles”.
“There is pain for a few days, but it has to be done,” says Hussain. “God help me, the pain in my body will go away.”
The Edhi Foundation offers addicts a free rehabilitation service and runs six centres in Karachi with around 4,500 patients receiving care at any one time. Treatment is basic.
“We don’t have the resources or the funds for things like methadone,” explains Dr Ayaz Memom, the clinic’s lone medic. Instead the centre provides a drug-free environment.”

If a person stops taking heroin, they will begin to experience withdrawal symptoms after around six hours and this will peak around 48 hours after they stop taking the drug.
“Cold turkey” is like a really bad case of flu, causing increased anxiety, sleeplessness, temperature changes and diarrhoea.
It’s a very unpleasant experience and if you’re living on the street and already in poor health, with other infections or illnesses, you’re in for a very rough time. The withdrawal effects will begin to diminish after three to seven days and detox will be complete after 7 to 10 days. This can leave people feeling tired and emotionally drained – but not cured.
While cold turkey will end the physical tolerance of heroin, it does not stop the psychological dependence and the learnt cravings which lead someone to take the drug – stress, worry, anxiety and unemployment can all be motivating factors.
It’s shocking to think that cold turkey is the only option available to many addicts in Pakistan. The WHO regards methadone as an essential medicine for treating heroin addiction and in the West we would never consider cold turkey as a treatment – it would be like going back 50 years.

What this means is a system of enforced “cold turkey”, with only sedative injections and paracetamol tablets offered for pain relief.

Many of Edhi’s patients – most of them men – are admitted by their families, against their will. Once in a clinic, they are locked behind bars.
Patients are housed in four distinct sections, marking progressive levels of heroin dependency. As I walk through the centre, the men inside push against the bars to tell me they are “completely better now”.
One pleads with me to shake his hand. As I did so, he gave me a small rosary and asked that I pray for him.
I spent several weeks in Karachi and each time I visited the Edhi centre I saw men trying to convince family members that they are ready for release.
Staff tell me they see a constant stream of patients leave and return within weeks – sometimes even days. There is little they can do to stop family members taking patients home midway through the withdrawal process.
“Withdrawal makes good people lie. These people will say whatever they need to get out,” says Dr Ayaz. “If they return in a week or a month, we’ll treat them again.”
Some patients I met were on their sixth round of treatment.
The scale of the foundation’s struggle to reduce heroin addiction in Karachi can be appreciated when driving through the city. One afternoon I ask the Edhi staff if I would be able to meet addicts on the city’s streets.
An ambulance driver takes me on a tour of various districts – Esa Colony, then onto Liyari and Maleer. I see groups of men injecting openly in the middle of the street. They share needles and look on as children pass, returning home from school.
The war in Afghanistan has seen opium poppy cultivation spiral and Karachi’s port is a hub from which heroin is shipped around the world. As a result heroin here is readily available and, addicts tell me, is often cheaper than food.
The addicts I speak to have a shared experience of poverty. Men without work, prospects or hope, dive into heroin use as an escape. 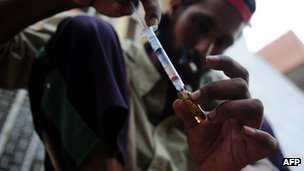 After eight days in rehab, Hussain and Yusaf decided they were ready to start their new lives and left the centre, claiming the Edhi Foundation had “saved them”. As they had checked themselves into the clinic, they were free to leave.

Hussain told me he could not wait to see his wife and son and was optimistic about his future, but his return home did not produce the welcome he had been expecting.
His years of heroin abuse have frustrated his wife beyond redemption. She no longer trusts him.
Distraught, Hussain tells me his wife has asked him for a divorce and has refused to let him into the family home. She wants to move on with her life and concentrate on raising her son.
At their family home, she tells me she is unconvinced his spell in rehab will work.
“As soon as he gets out he’ll start taking heroin again. What kind of father is he?” she asks and recalls one of the most traumatic phases of her husband’s addiction.
“He said ‘I’ll sell our son, who can stop me?’ That’s wrong. I’m a mother, I can’t tolerate this.
“He’s just a heroin addict. That is all he is.”
With nowhere to live, Hussain now sleeps on the street, and survives by working his way through Karachi’s soup kitchens.
To make matters worse, his brother Yusaf has run off, having stolen his phone and his last 500 rupees. For the first time in his life, he is all alone, the lust for heroin even overwhelming brotherly love.
For now, though, Hussain is at least drug-free, but whether this will last is anyone’s guess.
The Edhi system of rehab may not be ideal and little is known about the charity’s success rate. Its team of staff and volunteers often seem swamped by the scale of addiction they are dealing with in Karachi.
But the foundation offers a single lifeline for desperate people and is the only form of support for many addicts in a city that can sometimes feel like it is floating on a sea of heroin.