A sobering account for those in search of knighthood 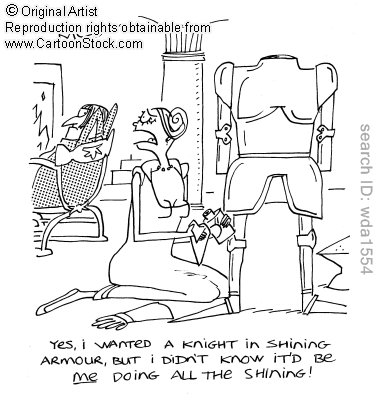 In today’s excerpt – the knights of the Middle Ages were anything but gallant, often bastard sons of minor nobility, unable to inherit, and joined to roving bands of thugs. And jousting tournaments were in no small part a way of keeping them out of trouble:
“It was … at the height of the fairs of Champagne and the Italian mer?chant empires, between 1160 and 1172, that the term ‘adventure’ be?gan to take on its contemporary meaning. The man most responsible for it was the French poet Chretien de Troyes, author of the famous Arthurian romances — most famous, perhaps, for being the first to tell the story of Sir Percival and the Holy Grail. The romances were a new sort of literature featuring a new sort of hero, the ‘knight-errant,’ a warrior who roamed the world in search of, precisely, ‘adventure’ — in the contemporary sense of the word: perilous challenges, love, trea?sure, and renown. Stories of knightly adventure quickly became enor?mously popular, Chretein was followed by innumerable imitators, and the central characters in the stories — Arthur and Guinevere, Lance?lot, Gawain, Percival, and the rest — became known to everyone, as they are still. This courtly ideal of the gallant knight, the quest, the joust, romance and adventure, remains central to our image of the Middle Ages.
“The curious thing is that it bears almost no relation to reality. Nothing remotely like a real ‘knight-errant’ ever existed. ‘Knights’ had originally been a term for freelance warriors, drawn from the younger or, often, bastard sons of the minor nobility. Unable to in?herit, many were forced to band together to seek their fortunes. Many became little more than roving bands of thugs, in an endless pursuit of plunder — precisely the sort of people who made [the newly emerging class of] merchants’ lives so dangerous. Culminating in the twelfth century, there was a concerted effort to bring this dangerous population under the control of the civil authorities: not only the code of chivalry, but the tournament, the joust — all these were more than anything else ways of keeping them out of trouble, as it were, in part by setting knights against each other, in part by turning their entire existence into a kind of stylized ritual. The ideal of the lone wandering knight, in search of some gallant ad?venture, on the other hand, seems to have come out of nowhere. …
“According to one early twentieth-century Medievalist, Amy Kelly, [in describing the tournaments]:
‘The biographer of Guillaume le Marechal gives an idea of how this rabble of courtly routiers amused itself on the jousting fields of western Europe. To the tournaments, occurring in a brisk season about twice a month from Pentecost to the feast of St John, flocked the young bloods, sometimes three thousand strong, taking possession of the nearest town. Thither also flocked horse dealers from Lombardy and Spain, from Brittany and the Low Countries, as well as armorers, haberdashers for man and beast, usurers, mimes and story-tellers, acrobats, nec?romancers, and other gentlemen of the lists, the field, the road. Entertainers of every stripe found liberal patronage . . . There were feasts in upper chambers, and forges rang in the smithies all night long. Brawls with grisly incidents — a cracked skull, a gouged eye — occurred as the betting progressed and the dice flew. To cry up their champions in the field came ladies of fair name and others of no name at all.
‘The hazards, the concourse, the prizes, keyed men to the pitch of war. The stakes were magnificent, for the victor held his prize, horse and man, for ransom. And for these ransoms fiefs went in gage or the hapless victim fell into the hands of usurers, giving his men, and in extremity, himself, as hostages. Fortunes were made and lost on the point of a lance and many a mother’s son failed to ride home.’ ”

Related article: Reclaiming life at the times of death