It was a peaceful procession.
We had gathered under the aegis of the National Committee to Protect Oil, Gas, Mineral Resources, Power and Ports, outside the National Press Club in Dhaka, on October 19, 2016. After a brief rally, where speakers described the harm that the Rampal coal power plant would cause the Sundarbans, the world’s largest mangrove forest straddling both sides of the Bangladesh-India border, we formed a procession, raised slogans and proceeded toward the Indian High Commission in Gulshan to deliver an open letter for the Indian prime minister Narendra Modi.
Since India is the major partner in building the Maitree Super Thermal Power Project, i.e., the Rampal coal power plant, the National Committee’s open letter called on the Indian prime minister to scrap the project.
It’s not only us. Forty-one Indian people’s movements, green and civil rights organisations have called on Narendra Modi to scrap the the project. So has the Unesco and the International Union for the Conservation of Nature (IUCN). A Unesco statement recommended the ‘Rampal power plant project be cancelled and relocated to a more suitable location’ as it could damage the world heritage site, home to 450 Royal Bengal tigers, expose downriver forests to pollution and acid rain, threaten the breeding grounds of Ganges and Irrawaddy river dolphins, far worsen the already liminal ecosystem which is being threatened by rising sea levels (The Guardian, October 18, 2016). Three large French banks, including BNP Paribas, a sponsor of the Paris climate summit in 2015, have refused to invest, while two Norwegian pension funds have withdrawn their investment. END_OF_DOCUMENT_TOKEN_TO_BE_REPLACED


Of all the slogans raised in protest against the coal power plant being built at Rampal in Bagerhat, this one’s the best. END_OF_DOCUMENT_TOKEN_TO_BE_REPLACED 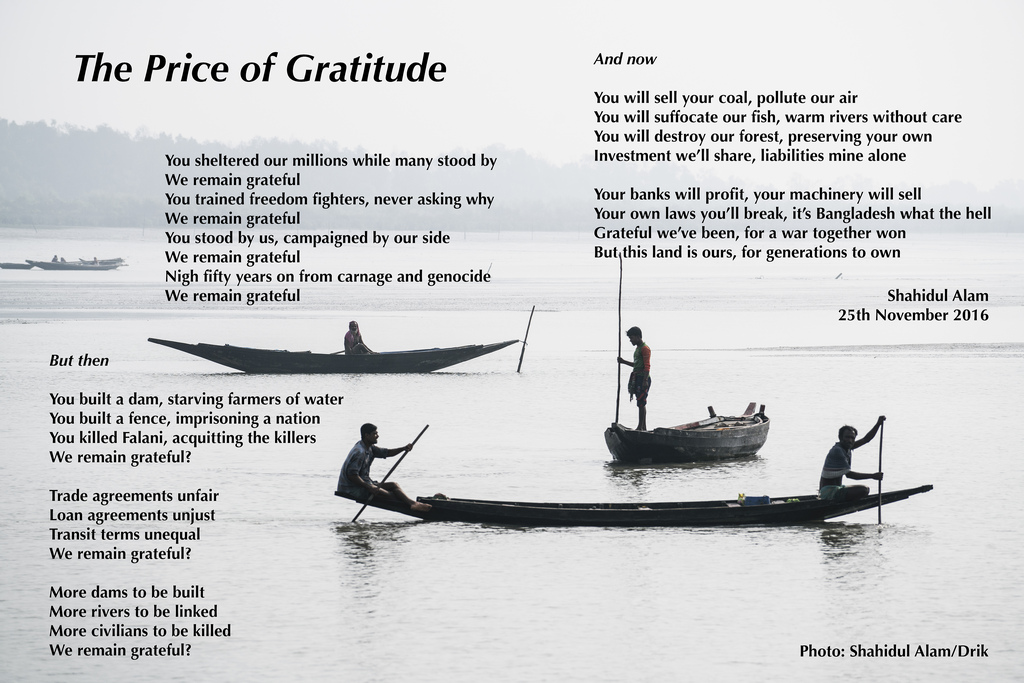 It is where the Bengal Tiger, now close to extinction, still stalks. It is where deer roam and hummingbirds fly. It is the richest terrestrial and aquatic ecosystem anywhere. Sunderbans (?beautiful forest? in Bangla), the world?s largest single tract mangrove forest is a UNESCO-declared World Heritage that has sheltered 50 million coastal people from ravaging storms. The beautiful forest is in danger. The joint project of PDB (Bangladesh) and NTPC (India) for 1320 MW Rampal imported coal-fired power plant spells disaster for Bangladesh. Thousands have taken to the streets in protest, braving arrest and torture, but the government, who have already killed protesters of other energy projects are determined to bludgeon through. We need you and we need you now.
On the 7th January 2017, we have called for a global protest. You have a role to play. Join the movement.
Stage demonstrations/human chains and send written appeals to the embassies of Bangladesh and India.
Organise bicycle rallies, boat rallies, use theatre, songs, cartoons, masks or just hold up placards. Send us your protest/solidarity video messages and photographs.
Appeal to United Nations.
Campaign to International Press/Media
Find other creative ways to resist.
Send them to: shahidul@drik.net and kallol_mustafa@yahoo.com. Share this message and make it go viral.