How did the story of the BDR rebellion at Pilkhana as being one of subaltern grievances pale away? Did it begin with the discovery of the bodies of the two army officers that had spewed out of the sewers at Kamrangir char? Or did it happen sometime later, when the first mass grave was discovered? When we watched live televised images of decomposed bodies, including that of the BDR director general, some of the bodies riddled with bullets, others mutilated beyond quick recognition. Bayoneted, eyes gouged out, a few had even been burned. As we watched these images, many of us immediately thought back of the sense of relief, maybe even complacency that we had felt the day before when the mutineers had assured TV reporters that the officers were alive. That even though they were being held hostages, they were safe and sound. They had lied to us. I think it was then that the first cracks appeared. 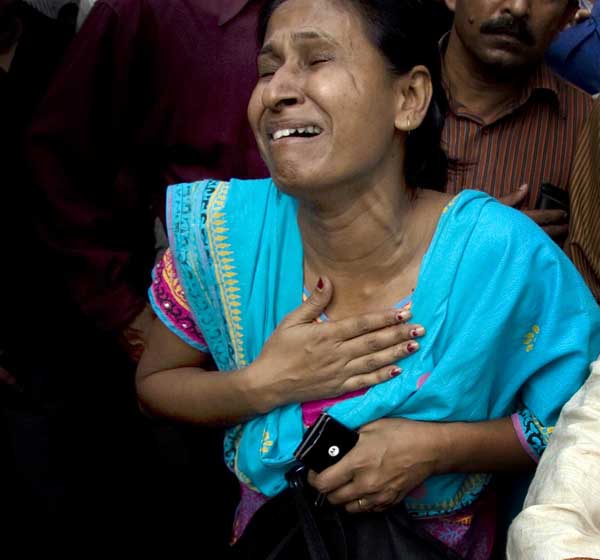 Truth is the first casualty of war.
And as more mass graves kept being unearthed, as more dead bodies were lifted out including that of the director general’s wife, as allegations of rape surfaced, as we heard stories of looting, as we tried to piece together the atrocities that had accompanied the rebellion, shock and horror set in.
Even now, two and a half weeks later, not all the dead have been buried. Three officers remain missing. Five bodies lie in the morgue unidentified. The shock and horror remains.
It was a subaltern uprising, that is how it had first been reported in the private TV channels, and in the print media too.
Three thousand border guards and their commanding officers had joined the three thousand plus soldiers stationed at Pilkhana for the annual BDR week. It had been inaugurated by the Prime Minister a day earlier. Their long-standing demands had not been placed before her. This had compounded their sense of feeling wronged. Over food rations (three months, as compared with twelve for the army), a denial of UN peacekeeping mission service, low pay (an average border guard earns five thousand taka per month), non-payment of promised daily allowances for extra duties rendered during operation Dal-Bhat and the parliamentary elections, and so on. But what appeared to have irked the mutineers most was army control of the BDR. As one of the mutineers had put it, `We are not against the nation or the government. We want that the BDR should control the BDR.’
But the subaltern grievances story soon receded into the background as the macabre details of the killings unfolded before the nation. The army officers became the victims, instead of being the victimisers. Passionate, at times enraged, debates spilled over from TV discussion programmes to printed columns and editorials to the blogosphere. Whether the rebellion should have been resolved through military, rather than political, means. Whether the Prime Minister should have sat for negotiations with the mutineers. Whether a general amnesty should have been declared (later clarified to exclude those who took part in the mutiny). Whether a military operation would have resulted in more bloodshed, general and widespread, or whether the lives of the officers could have been saved. Whether ministers and political party leaders should have gone to Pilkhana to talk to the mutineers. Whether this was the time to seriously consider moving the BDR headquarters and Dhaka cantonment away from the city centre. Whether the investigations (ongoing) would reveal the whole truth.
But gradually a bigger question has unfolded before us as it becomes clearer that much preparation and planning had gone into the rebellion, that it was not a spontaneously-ignited act of murderous frenzy that overtook some soldiers (for instance, the mutineers seem to have been divided into different groups wearing differently-coloured bandannas). It haunts us as I write, amidst all the mud-slinging that has erupted between the political party leaders, including the Prime Minister herself, her ministers and party leaders, equally matched by the leader of the opposition Khaleda Zia and other BNP leaders. Amidst a general sense of disappointment at an all-party parliamentary inquiry committee not having been formed. Amidst public concern and anxiety that we may never get to know the truth of what did happen, and why.
Were other forces, external to the BDR soldiers, involved? Did they make clever use of long-standing grievances among the BDR, reputed to be the nation’s `first line of defence’? Was it intended to de-stabilise the government, as a Bangladeshi blogger has put it, to be “the center of a whirlpool from where other tensions and turbulence will cascade out.” And, of course, this question is inextricably linked to another: who stood to benefit? Followed quickly on its heels by a third: what lies ahead?

The present as history

That the nation’s territorial sovereignty was, and still is, at risk, is clear. Is the worst behind us? We do not know. After all, all twelve sector commanders were killed. The nation’s borders — arbitrarily-imposed as they were by the retreating colonial powers in 1947 — are still feared to be porous. While listening to news of the newly-appointed BDR director general’s efforts to re-stabilise the paramilitary force, to strengthen the functions of the force across the country and at the headquarters in Pilkhana, one comes across other newspaper reports, too. According to one, an army officer has said that that he does not feel safe to return to his work station. According to another, some officers have requested that they be sent back to the army, and not to the BDR.
Sections of the Indian media, obsessed as ever with their arch-enemy Pakistan, have written of ISI (Inter-Services Intelligence) involvement, at Pakistan’s reluctance that the war criminals of 1971 be tried by Sheikh Hasina’s government. These have been quickly countered by theories of RAW (Research and Intelligence Wing, India’s foreign intelligence agency), and thereby the Indian government’s involvement in the Pilkhana carnage. The hidden design, according to some widely-circulating e-mails, is to turn Bangladesh into a vassal state, one that is subservient to Indian national interests.
And as the Commerce Minister Lt Col (rtd) Faruk Khan, who is also encharged with coordinating the investigations into the BDR mutiny, pre-maturely and, most unwisely, speaks to the press about JMB’s (Jama’atul Mujahideen Bangladesh, the banned terrorist organisation) links to the mutineers, I cannot help but recollect other things. Of the American ambassador’s pronouncement, after the Pilkhana carnage, that that US government would assist Bangladesh in combating terrorism. I also cannot help but remember that Sheikh Hasina had pledged support for the US-led war on terror.
Will the rebellion act as a stepping stone to Bangladesh joining the `war on terror’ club? That remains to be seen. But if it does, it will surely thwart much-needed attempts to build a national army free of political aspirations, and severely impede the peoples’ ongoing struggles for greater democratisation of state and society. And that, will not be in the nation’s interest.
——————————–
First published in New Age on Monday the 16th March 2009