Bin Laden was, though, a product of a monumental miscalculation by western security agencies…. Al-Qaida, literally “the database”, was originally the computer file of the thousands of mujahideen who were recruited and trained with help from the CIA to defeat the Russians.

Robin Cook, British foreign minister, 1997-2001
(in saying this, he was divulging confidential information.
Cook died a month later, in August 2005).

That al-Qaeda originated in the US-financed mujahideen guerilla war in Afghanistan, that Osama bin Laden enjoyed American support and received CIA training in `weapons, sabotage and bomb-making,’ is well-known. That Laden later fell out with the US administration over the entry of US forces into Saudi Arabia (the presence of foreign forces in the “land of the two mosques”) after the Iraqi invasion of Kuwait in 1991, is also well-known as is known that the resulting enmity led to al-Qaeda’s attacks on 9/11 in the US (for instance).

But this story line — once-allies-now-enemies-unto-death — seems untenable in the light of recent research conducted by British political scientist and policy analyst Nafeez Mosaddeq Ahmed, The War on Truth: 9/11, Disinformation and the Anatomy of Terrorism (2005) . A Norwegian daily, more-recently, has published an article based on his research (Kristin Aalen, Terrorists Working for Western Countries, Stavanger Aftenbladet, 24.11.08?). It is accompanied by a geo-political world map — largely true to his findings except for over-simplifiying the Pentagon’s sponsorship of al-Qaeda fighters in the Balkans — which outlines how these two forces have worked together. The Norwegian text has been substituted by its English translation, available on Nafeez’s blog. Without going into the details of what is shown on the map, I want to write instead about what he says of al-Qaeda (`Terrorism and Statecraft: Al-Qaeda and Western Covert Operations after the Cold War,’ in Paul Zarembka ed. The Hidden History of 9-11). 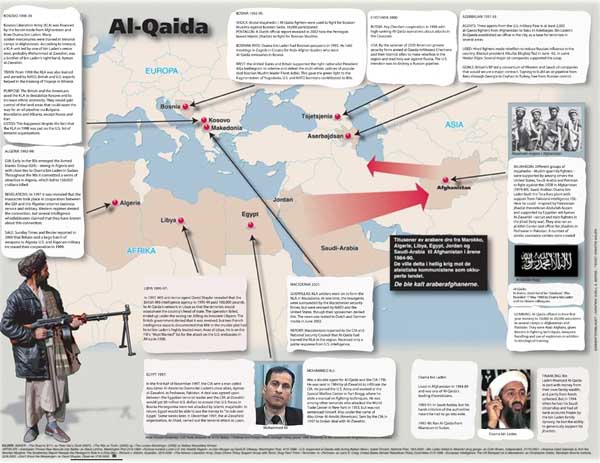 Al-Qaeda is a monolithic, hierarchical organisation. Its activities are coordinated by its leader, Osama bin Laden. It is the source of contemporary international terrorism. These conventional protrayals, writes Nafeez, are false. The truth is, that al-Qaeda — a term coined not by Islamists but by the CIA — refers to the computer database that Robin Cook had pointed out. Of course, Nafeez adds, this does not mean that it is not `some sort of identifiable entity.’ It does exist, but not as `a self-directed institution in its own right,’ rather, as an amorphous association of networks.

Factually-speaking, al-Qaeda is `a post-Cold war strategic instrument.’ Although born within the realities of the Soviet occupation of Afghanistan, in the CIA’s vision, its operational scope was not to be restricted to Afghanistan only. According to a CIA analyst interviewed by Richard Labeviere, chief editor at Radio France International, “The policy of guiding the evolution of Islam and of helping them against our adversaries worked marvellously well in Afghanistan against the Red Army. The same doctrines can still be used to destabilize what remains of Russian power, and especially to counter the Chinese influence in Central Asia.”

According to Nafeez, al-Qaeda’s activities, during and after the Cold War, related primarily to a new doctrine of covert destabilisation, one that was, and is, being implemented in `new theatres of operation strategically close to Russian and Chinese influence,’ i.e., eastern Europe, the Balkans, the Caucasus, and central Asia. As such, al-Qaeda is better characterised as a `conglomerate of quasi-independent Islamic terrorist cells,’ one that spans at least 26 countries.

This conglomerate is inextricably embedded — both with regard to its raison d’etre, and its modus operandi — in another conglomerate, a `disturbing’ one, says Nafeez, of international Western diplomatic, financial, military and intelligence policies. The geo-strategic structure of al-Qaeda derives directly from western corporate interests, those particularly related to monopolising global energy resources. In all mujahideen activity, one consistently comes across the directed involvement of Western financial, military and intelligence power. This takes place through state-regional nodes in strategic regions (prime examples are Saudi Arabia, Pakistan and Algeria), direct liaisons, and human nodes. US, British and Western power `routinely manipulate al-Qaeda’; in all cases, including 9-11, it generates destabilisation. This `paves the way for, and ultimately sustains the involvement of, Anglo-American interests in the monopolization of regional resources and the establishment of military-backed geopolitical power.’ Thus, al-Qaeda is not, as popular perception goes, `a foreign enemy external to Western civilization’. Rather, it is the name for `a highly developed category of Western covert operations,’ one that is designed to secure destabilization through the creation, multiplication, mobilization, and manipulation of disparate mujahideen groups.

Epilogue: Debates are currently raging in Bangladesh over the necessity of cracking down against militancy, the lack of a clear government policy, the likelihood that Islamist militant groups are regrouping for attacks, that madrasas are breeding grounds for extremists, militant attacks are aimed at destablising the government, and the need for regional anti-terror initiatives.

Are these debates, and policy proposals, totally un-connected to the policy of `guiding the evolution of Islam’ in what is now considered by some to be a new sphere of US strategic interest? Are these un-connected to the US Embassy’s growing concern to promote `respect for American values’ in Bangladesh? (see Sumit Ganguly, The Rise of Islamist Militancy in Bangladesh, report commissioned by the United States Institute of Peace, 2006 ). Those taking part in the debate, either deliberately or foolishly, feign ignorance.