A patriot might not readily describe his native city as a ?death trap??and?a beautiful place in the same breath, but for the Bangladeshi photographer?Abir Abdullah, they?re not mutually exclusive. Bangladesh and its capital, Dhaka, one of the most populous and dense cities in the world, face complex challenges, as a robust economy frequently beset by natural disasters.
?It?s a good city,? said Mr.?Abdullah, who works for the European Pressphoto Agency. ?It has good schools, good jobs, but still we always forget that it?s a burden ? millions of people, it?s a burden for the city. And that worries me.?
For the past two years, Mr. Abdullah, 41, has been chasing and photographing the frequent and devastating fires that plague the city, one of the many consequences of its burgeoning population. This continuing project, ?Death Traps: Tales From a Mega-Community,? seeks to show how vulnerable an ostensibly up-and-coming modern metropolis is, and how the city lacks the infrastructure, expertise and labor to combat this threat.
?We have fires in slums, shopping malls, houses, in the?garment?and textile factories,? he said. ?Rich, poor, nobody is safe.?
In 2010, a fire killing more than 100 people underscored the intertwined perils beleaguering Dhaka. The tiny, narrow streets, where slum is built upon slum, hindered the emergency responders. When they did arrive, they were ill-equipped: short ladders, a volunteer force lacking in skill or experience. Swift and efficient evacuations were jeopardized by the sheer number of people trying to escape confined, crowded spaces. 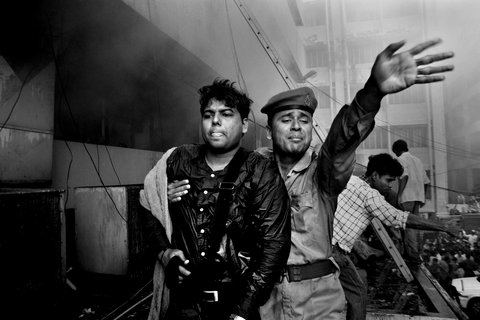 Abir Abdullah/European Pressphoto AgencyA firefighter with an injured man during a blaze at the 11-story building in Kawran Bazaar in Dhaka. Feb. 25, 2007.

?People rushing for safety, looking to rescue others: it looked like mini-war,? Mr. Abdullah said.
In the midst of a chaotic scene, however, he was composed and methodical.
?I plan even when I shoot this kind of situation,? he said. ?I follow the light. The rescue operation is almost the same in every corner, so I go where the light is beautiful, and mysterious. And I think that makes the difference.?
He approaches the scene as though it is a kind of theater, constructing a stage and casting characters in a grim play, seeking to ?focus on the issues that are serious for the country and for its people. But I try to show them not to victimize, but to show their strength. To show that they lack a lot of different things.?
Much of Mr. Abdullah?s work demonstrates an interest in a large-scale existential menace to his country and its citizens. Other projects include a series on the veterans of Bangladesh?s 1971 war of independence (which killed three million civilians, by some estimates) or a series on the periodic flooding that threatens 100 million people occupying the low-lying rural areas ? flooding that experts expect to worsen in frequency and magnitude with an increasingly volatile climate. Or earthquakes.
?At times I am very afraid, because Dhaka is very vulnerable to earthquakes,? he said. ?It will be extremely difficult to rescue people. We had a building collapse from bad maintenance. To rescue that one building took seven days, a seven- or nine-story building. We have 70,000 buildings in the city. Just imagine, who will rescue these 70,000 buildings in the event of an earthquake??
His photographs also show the small-scale repercussions, felt on an individual level, of sweeping forces of humanity and nature ? an approach that he says comes from the gut.
?It?s one of my strengths that I can go close to the people that I photograph even in desperate situations,? he said. ?I can see the problems of the people and see the fear from my heart. And I think that signifies that I feel it from my heart and I feel it inside. It?s not just going there and taking photos of what?s in front of my eye and in front of my camera; I have this kind of emotion that I can transfer on to my photographs.? 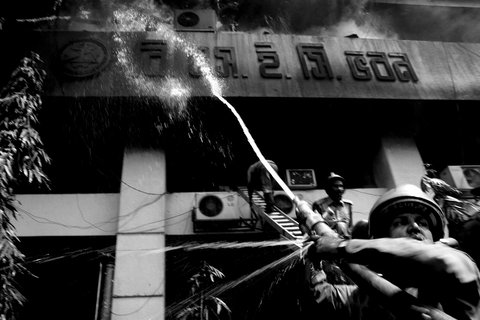 Abir Abdullah/European Pressphoto AgencyFirefighters tried to put out a fire in Dhaka. Feb. 25, 2007.

Abir Abdullah was a student of the first batch and later a vice principal at Pathshala, South Asian Media Academy