Posted on January 25, 2011 by Chris Riley
From the Chobi Mela VI Exhibition “Girl Who Fell to Earth by Joanna Petrie. 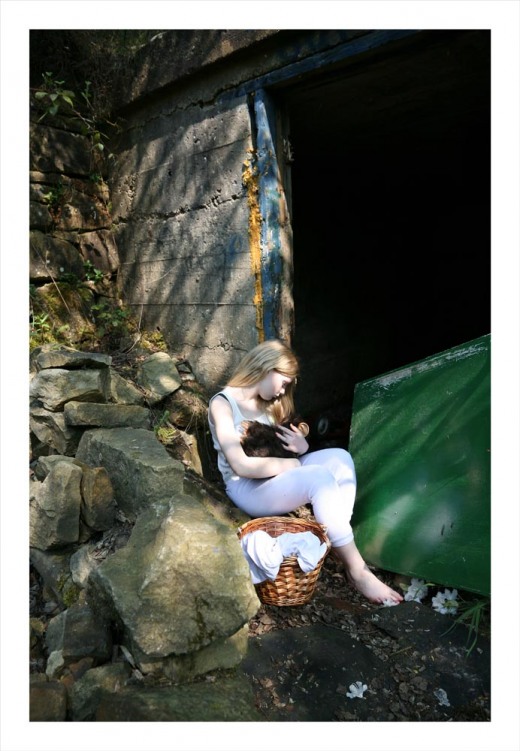 A trip to The British Council to see work by Gareth Phillips and Joanna Pettrie turned into a haunting journey into the macabre side of our, ok, my, dreamworld. 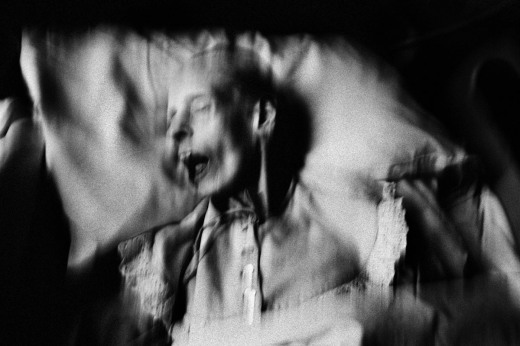 From the Chobi Mela VI Exhibition “Existence” by Gareth Phillips
While Phillips showed images from a hospice, Petrie showed work from her own shadow world. She talked gently about her task of bringing half experienced dreams into reality through staged photographs in a Lancashire quarry. Your humble correspondent is from Lancashire and was startled to find the images familiar and also meaningful in the context of Lancashire?s history as being a notorious home of witches and the occult. The Witches of Pendle, 12 of them, were executed in the mid eighteenth century in the biggest witch trials in English history. The hangings took place a few miles away from Joanna Petrie?s location for her work. A coincidence? I looked at the work again and again ? and invite you to come to your own conclusion.
Robert Pledge, President Contact Press Images. Photograph Chris Riley 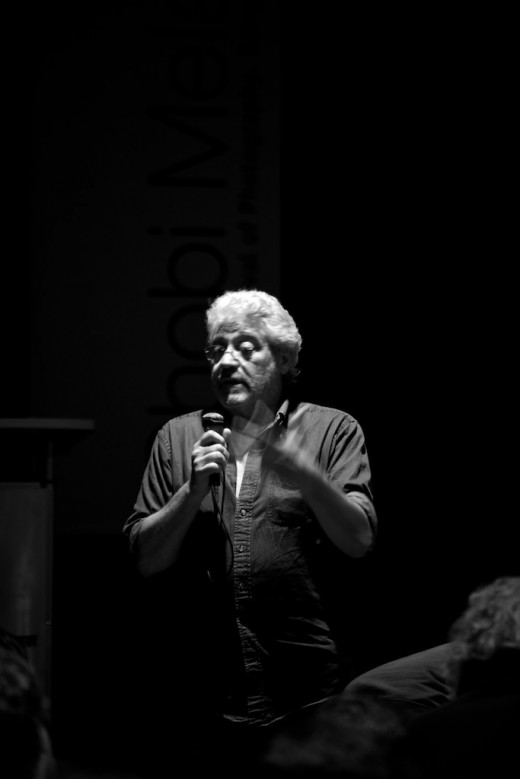 Chobi Mela VI evening presentations at the Goethe Institut continued with a historical presentation by Robert Pledge of work by David Burnett, also showing at Drik. Having had a conversation about archives only a few days ago it was delicious to be sucked into this history. As far as I can tell, Robert?s selection of 100 Burnett images from John F Kennedy to Barack Obama by way of the Olympics and what seemed like a permanent war somewhere, was a helter skelter descent into the abyss of recent history. Punctuated by athletic prowess and the dawn of the space age it was a depressing and gorgeous presentation. Images of Burnett himself told a tale of technology, reducing in size increasing in power but seemingly decreasing in influence. Not that the work decreased in power, it was a spell binding slice of an American photographers sense of the real.
Which, of course, is the point. This archive is the archive of an American and as such reflects the world he created through the art of photography. I was personally stunned at how accurately it reflected my own sense of it all. Then again, he created that sense in no small way. Pledge also entered into a friendly spat with Pedro Meyer about photography before the shot and after the shot for an audience of photoshopping multimedia artists. Interesting.
Multimedia slideshows seem to be evolving the art of photography itself. There were several good ones at Chobi Mela. The story telling skills of the photographic mind are not the same as film makers. If film is the art of time then photography, being the art of light, is about being still, even when presented as slide show multimedia.
In one show computerized voices drifted across everyday Japanese artifacts and rooms creating a spectral presence of the banal which in it creating its own beauty destroyed the social asphyxia it represented. A mix of stills and very short form video added to the disturbance of a piece about the sexual objectification of, well, objects. The slide show as art form is here. Its very good. I would like this on an iPad.
The brilliance of Chobi Mela persistently emerges as a near contact sport between the past and the future, old and young. The best of this was to come: Under the expert tuition and mentorship of Morten Krogvold the students of Chobi Mela produced a stunning show of staggering genius. Old hands were left ?jealous? of a body of work that made the sublime out of the tension between the telling of a hopeful elevating story and the context of a sometimes hopeless situation: Dhaka itself. The city is its people, fifteen million of them living in an urban environment that redefines the idea of mismanagement. It was the people of the city that the students brought into the show.Yet the predictable images, those that dominate a western view of the world, a view that would focus on the squalid, the decayed and the hopelessness, were totally absent. Instead it was a euphoria of images that told of life and love, of death as life and of the sheer bloody brilliance of the human spirit. It is a body of work that is as unified as it is diverse, representing the innocence of young artists and the seriousness of their intent. Sure, they had been whipped into shape by their frustrated teacher but the whipping had been to a frenzy of creativity, personal, explicit and powerful. It was a joy to behold and, for me, the thrill of Chobi Mela. All the exhibitions of work are carefully curated and thought through. The talent is indeed international. But all of it is a background and stimulant for what is actually created here in Dhaka by an international group of students from far and wide. It is a hint of a future Dhaka, a city of light that is beginning to attract the storytellers of future history.

2 thoughts on “A show of Magic”